A teenage girl who sought spiritual protection against enemy, from a herbalist, has ended up being abducted. 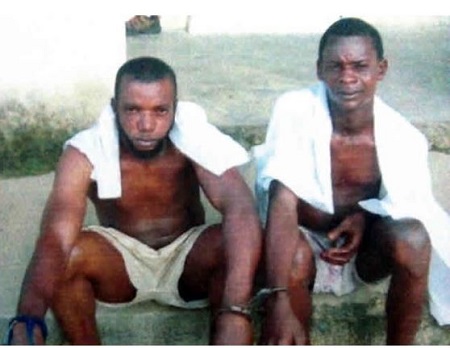 Suspects
A herbalist identified as James Johnson, who abducted a  17-year-old girl in the Ajah area of Lagos State under false pretenses of fortifying her against enemies, has been arrested by the State’s Police Command.

The 22-year-old herbalist who was arrested alongside his 28-year-old accomplice, Emmanuel Emmana, at a hotel they  reportedly used as their hideout in the neighborhood, had approached the girl, Bilkis, at her mother’s shop in Akinyemi Market, Ajah, while he was hawking herbs.

It was gathered that he told Bilkis that he had a vision that some enemies were going after her and that she needed prayers to fortify herself against any spiritual attacks. He further told her to buy coconut and salt for the prayer which she quickly bought around the market.

Punch reported that Johnson who had carried out five fraudulent operations in the Ajah area before luck ran out on him, was about taking the girl to his hotel room when her neighbour who was passing by, saw her and raised an alarm. A woman, whom the suspects had defrauded on the same spurious vision, was at the hotel that day on an appointment with the suspects.

He said, “I started selling herbs in January 2018. Emmana later joined me and we hawked together. We made people to believe that we have spiritual powers. We have defrauded five persons. There was a woman I collected N30,000 from in May 2018. I took the woman to a village called Kosilu, Ogun State, to meet one man. I was planning to collect N1.5m from her for special prayers, but she later discovered that it was a fraud.”

Emmana from Calabar, Cross River State, who also confessed to committing the said crime with the arrested suspect, said Johnson introduced him to the fraud, adding he only got N9,500 share from the fraud proceeds.
Top Stories