Radio Station Fined For Playing 'This Is Nigeria' By Falz, Other Songs By Wande Coal, Olamide


A radio station has been reportedly fined by the National Broadcasting Commission for playing some songs. 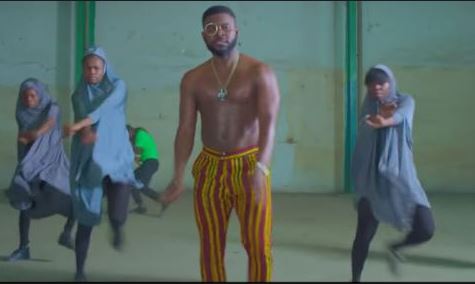 Falz in "This Is Nigeria" video
It has been reported that a radio station in Jos has been fined 100,000 Naira for playing Falz's song, "This is Nigeria".
The National Broadcasting Commission, NBC, wrote a letter to the radio station informing them that Falz's song titled 'This is Nigeria' is "laced with vulgar lyrics" and for playing the song, they will be sanctioned.
The lyrics they pointed out that they had a problem with is the part that goes, "This is Nigeria, look how we living now, everybody be criminal." 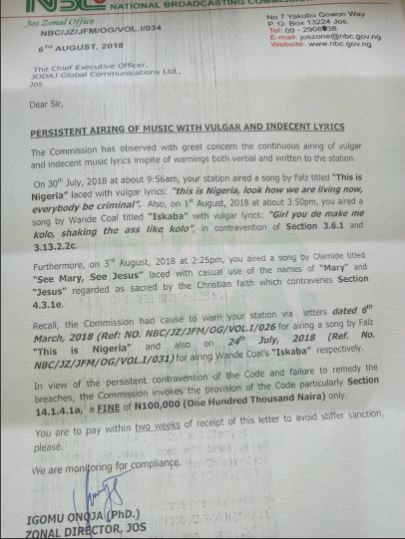 Also, the commission fined the station for playing Olamide's song titled "See Mary, See Jesus." The letter says Mary and Jesus are regarded as sacred by the Christian faith and as such contravenes section 4.3.1e.
The station was also cautioned for playing Wande Coal's Iskaba with the lyrics, "Girl you dey make me kolo, shaking the ass like kolo" which NBC says is vulgar.
NBC has asked the station to pay the fine of 100,000 Naira within two weeks, else they will be made to face stiffer sanctions.
Nigerian broadcaster, Folaranmi Folayan, who shared the development on Twitter, condemned it. 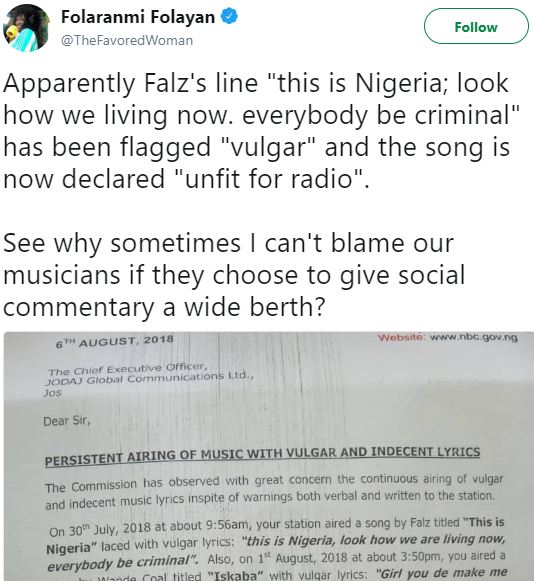