2015: How I Convinced Jonathan To Concede To Buhari - Okonjo Iweala Reveals


Nigeria's former Finance Minister, Ngozi Okonjo-Iweala shares the story of how she convinced Jonathan to concede to Buhari during the 2015 election. 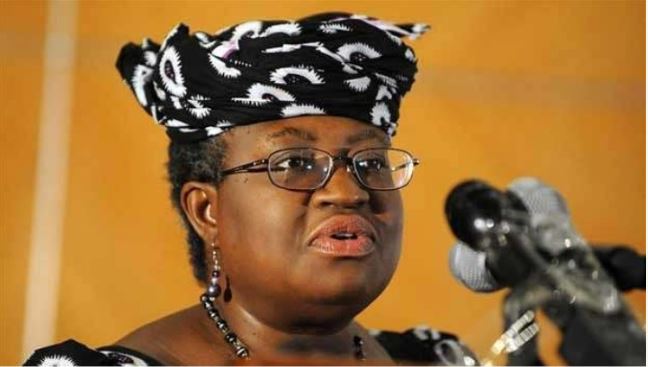 Former Finance Minister, Ngozi Okonjo-Iweala
Immediate past Finance Minister, Ngozi Okonjo-Iweala, has shared an insider account of what transpired in Aso Rock as the 2015 election results were being collated by the Independent National Electoral Commission (INEC).
Then incumbent President Goodluck Jonathan of the PDP lost the popular vote to then opposition backed Muhammadu Buhari of the APC.
A lot has been shared about the moment Jonathan placed a concession phone call to Buhari. However, one more account from a major player in the nation’s affairs at the time, won’t hurt.
“The state-by-state announcement of election results by Professor Attahiru Jega, the Chairman of INEC, began at noon on Monday, March 30. I joined a few colleagues from the Economic Management Team at the office of one of the presidential advisers where a team was monitoring the results”, Okonjo-Iweala wrote in her book ‘Fighting Corruption Is Dangerous, the story behind the headlines’.
Okonjo-Iweala captures the moment when it dawned on the room that Jonathan was going to lose the election:
“The atmosphere was electric. Throughout the day, vote counts came in from different states, mostly from the South-South and South East. The president was leading, but his margin was getting slimmer. And the results from the northern states—the opposition stronghold—had not yet come in. By 8pm, these results began to arrive, and the tide turned against the president. By 10pm, it became clear that the Jonathan administration was now on a losing streak”.
Announcing the votes
When the counting and announcement of results resumed at noon on March 31, Okonjo-Iweala wrote that, “we all assembled again in the adviser’s office—which we now called our situation room. A couple of hours later, the Minister of Aviation, Osita Chidoka, called me to say that a concession speech was being drafted by Mr. Reuben Abati, the president’s speech writer, and they wanted my contribution. What did I think he should emphasize in the speech?
“I drafted a few thoughts on the economic achievements of the administration, the president’s legacy and the difficult economic challenges facing the nation that needed immediate attention. By 4pm, I felt I had enough material and decided to go to the Villa to talk to those working on the speech. I wondered where the president was and what he was doing”.
Okonjo-Iweala writes that when she got to the Villa, she found a group of politicians urging Jonathan not to accept defeat and another group cajoling him to throw in the towel because it was all over.
“At the Villa, I was met outside the residence by Osita Chidoka, who collected my input for the speech and told me the president was in the residence. When I entered the Villa, the president was in one of the living rooms with the Vice President, some advisers, and a group of politicians who were arguing passionately about the conduct of the elections and irregularities of which they said they had evidence, such as videos of underage voting in certain parts of the country.
“They were urging the president not to concede the election. More politicians came in and joined them. On the opposite side of the room were the Minister of Aviation Osita Chidoka; the Attorney General of the Federation, Mohammed Bello Adoke; and the Minister of Agriculture, Akinwunmi Adesina. They were relaying a dissenting view, arguing that the president should concede”.
A whisper that worked
Okonjo-Iweala says she was one of those in the room who advised Jonathan to throw in the towel.
“I was immediately drawn into the argument as everyone turned to hear my views. I said I thought the president should concede and do so before the announcement of the vote count was completed. The Special Assistant to the President on Domestic Affairs, Dr. Dudafa Waripamo-Owei, a politician, whom I expected to side with the politicians, also said he sided with those who thought the president should concede.
“A heated argument ensued. Throughout the discussion, the president said not a word. He kept his own counsel and just kept welcoming guests and party loyalists who were joining us at the Villa.
“According to the announcements we were all following on the big screens, only a few more states were yet to report their election results”.
Okonjo-Iweala recalls the moment when she whispered to Jonathan to concede.
“I sat next to the president and whispered to him that if he was going to concede, he probably should do so before the announcement of election results ended.
“Suddenly, he got up and left the room. We all thought he had gone off for a few moments of quiet. He returned about twenty minutes later and sat down without saying a word. I decided to take a chance and press him again on a timely concession. As I whispered again for a second time, the president responded to me out loud, “CME(Coordinating Minister of the Economy), it is done. I have called President-elect Buhari and conceded!”
“We were stunned! He had said not one word to us, but it was clear that this was a man who had made up his mind and done what he thought was right. The president repeated something he had often said to his ministers and advisers: “I have always said that power for Jonathan is not worth shedding a drop of blood of a single Nigerian”.
Buhari won the 2015 presidential election with 15,424,921 votes. Jonathan came a close second with 12,853,162. It would be the first time an incumbent president would lose an election in Nigeria.
Ngozi Okonjo-Iweala served as Minister in the administrations of Chief Olusegun Obasanjo and Goodluck Jonathan.
Okonjo-Iweala was Minister of Finance under Obasanjo from July 15, 2003 to June 21, 2006.
Okonjo-Iweala also had a brief spell as Foreign Affairs Minister under Obasanjo from June 21, 2006 to August 30, 2006.
She is credited with achieving debt forgiveness for Nigeria under Obasanjo.
Okonjo-Iweala returned as Finance Minister and Coordinating Minister of the Economy under Jonathan; a position she held from August 17, 2011 to May 29, 2015.
Source: Pulse
Top Stories