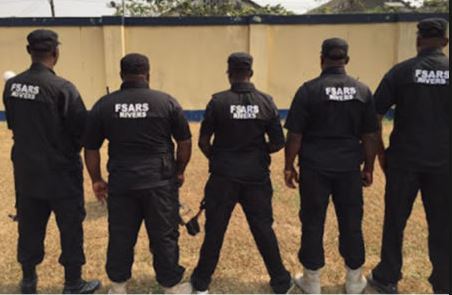 File Photo
Not less than 120 operatives of the Special Anti-Robbery Squad (SARS), Ikeja, Lagos State Police Command, have applied to be transferred out of the unit, a source disclosed yesterday.
The panic transfer moves came on the heels of a signal received from Force Headquarters, Abuja, from the Inspector-General of Police, Ibrahim Idris, on Thursday, stating new laws and orders as the determination to overhaul SARS gathers momentum. The police source disclosed that at least 120 SARS operatives had applied for transfer from the unit, stressing that to remain was really a “suicide mission.”
A police wireless message sent to different commands across the nation, which was made available to New Telegraph correspondent, revealed that SARS operatives, with immediate effect, “should desist from wearing FSARS/SARS black uniforms or any other dress earlier approved.
“Accordingly, all personnel must wear normal police uniforms, displaying clearly their name tags, force numbers in the case of the rank and files, police identification tags, pending IGP’s determination of their operational dress code.
“The IGP further directs that any officer who flouts this directive will be severely sanctioned, while supervising officers under whom this order is flouted will be held liable.
Treat as very important please.”
To further underscore Idris’s instruction, the Lagos State Commissioner of Police, Mr. Edgal Imohimi, ordered all policemen under his watch to immediately be on police uniform. This includes operatives of X-squad and monitoring units.
Another police source said: “Majority of the SARS men have chosen to leave the SARS’ unit. The application asking to be transferred is called demobbing. It is allowed in police.
"These SARS men said it wouldn’t be easy for them to chase after armed robbers and kidnappers while in full police uniform. “It will make them become easy target for these criminals. They called it a suicide mission. Nobody wants to die. They have wives and children. If they are killed by armed robbers, nobody cares for their wives or children.”
Top Stories