Dismissed Soldiers, Others Arrested For Stealing Goods Worth N13million (Photo)


Men of the Nigeria police have apprehended dismissed soldiers and others for stealing goods valued at N13 million. 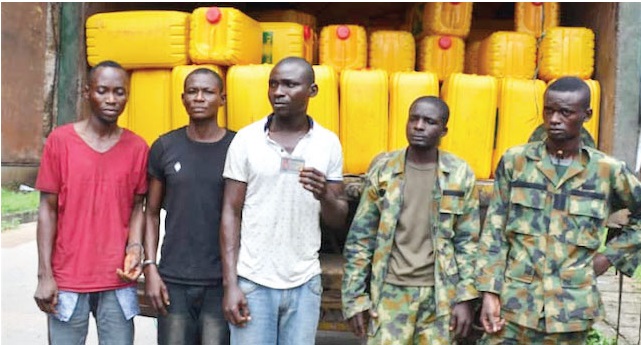 The suspects after they were nabbed
The Police Lagos State Command have arrested two dismissed soldiers Moses Johnson 25 (a dismissed soldier), Akintola Abiodun 25 (dismissed Air force personnel and three others who allegedly diverted trucks loaded with goods worth N13m.
Others suspects arrested with the two military personnel are: Monday Ayele 42, Esowanne Emeka 30, Moses Johnson 25 and Osegbu Chidi 30.
The State’s  Commissioner of Police Edgal Imohimi said the suspects are specialists in diverting trucks on the highways and luck ran out of them when they attempted to divert a Kano State bound truck laden with groundnut oil.
Edgal said the activities of the gang came to an end when operatives of the command arrested them on Sunday, September 2.
He said  “On the aforementioned date, at about 8pm,a Sterling truck with registration number LSR-266-XW, laden with groundnut oil valued at N13,250.000.00 was hijacked by a five man gang of highway robbers at Epe expressway.
“ They stopped the Kano State bound truck close to Ijebu Ode and pushed the conductor and the driver out of the vehicle. However, as the duo were trekking towards Epe-Lagos, they came across a policeman and narrated their ordeal to him.
“The policeman immediately contacted some of the police stations along the route taken by the robbers and at about 11:30 pm same day, policemen on stop and search duty, saw the truck coming and intercepted it. In the process, one Monday Ayele aged 42 years and Esowanne Emeka aged 30 years were arrested.
“During interrogation, they mentioned the following persons as part of the people that hijacked the truck, Viz:- 13NA/69/8811 Lance Cpl Moses Johnson age 25 years (a dismissed soldier),
13NAF/89/8811/ Lance Cpl Akintola Abiodun age 25 years (Dismissed Airforce personnel),
Cpl Osegbu Chidi aged 30 years (a fake soldier).”
Speaking on the role he played in the alleged robbery, Johnson said, he was dismissed in 2015, and since then he had taken to escorting trucks for long distant vehicle with his former uniform to facilitate an uninterrupted movement of trucks for a fee.
His partner,Johnson said, “I was at One  Division Maiduguri Nigerian Army but was dismissed in 2015 during the former President Jonathan led administration because he refused to join in the operation to fight the Boko Haram insurgents.
“After my dismissal I kept maintaining my status as a serving soldier and also use the uniform to hustle and to feed. I kept using my uniform since then to escort vehicles.
“On this particular incident, I was called by my friend Onoja to offer escort services to his boss. I was paid N10, 000 to render the service. I did not know what they were into. We didn’t hijack the truck. What happened that day was that our truck jammed the white vehicle we were driving along with the truck.
“Onoja ordered his driver and another mother to enter the truck and drive it. It was simply because they drove roughly. I did not hijack any truck.”
The Commissioner of Police also said that the truck with the goods was recovered intact and all the suspects have been identified by the victims.
He revealed that an investigation into the matter is still ongoing and the suspects will be charged to court at the conclusion of the investigation.
Top Stories