An Abuja-Kaduna train has rammed into some cows, crushing about fifty-two of them to death in the process. 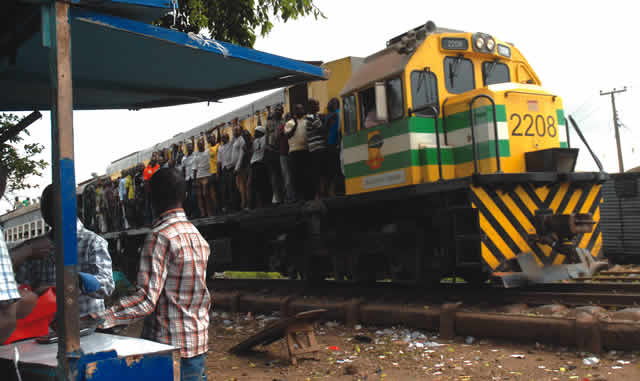 File photo used ony for illustrative purpose
The Kaduna State Police Command said on Sunday that 52 cows had been killed by an Abuja-Kaduna bound train, Punch Metro reports.
The state Commissioner of Police, Ahmad Abdulrahman, stated this during a press conference in Kaduna.
He said the incident took place at Kasarami in the Kagarko Local Government Area of the state.
He said the command received a distress call when the incident occurred and that he and some policemen attached to the command moved swiftly to the spot.
According to the police chief, the train was speeding and in the process crushed 52 cattle to death.
He added that 27 of the cattle were still alive, but had to be slaughtered and sold at low prices in order to avoid a total loss.
Abdulrahman explained that the Fulani herdsmen were on their way back to Katsina State when the incident happened.
The CP said, “When we got to the scene, we found out that contrary to earlier calls of insurgent attacks, what actually happened was an accident involving cows.
“Fulani herdsmen, who passed the night at Kasarami, asked if they could cross over with their cattle and were misinformed that there were no rail services on Sunday.
“It was when they were half way that a fast moving train from Rigasa Station on the way to Abuja approached.
“I want to assure the people of Kaduna State that what happened was an accident and no life was lost; only the cattle.
“I had a meeting with their leaders and the farmers in the area to check a recurrence.”
The police boss called on residents to go about their lawful activities as the command was doing everything possible to safeguard lives and property in the state.
Top Stories