The Federal Road Safety Corps has begun screening of more than 15,000 applicants for various positions in its ongoing nationwide recruitment exercise. 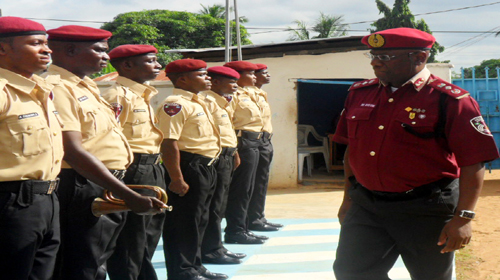 File photo: FRSC boss and his officers
The Federal Road Safety Corps (FRSC) has released its nationwide recruitment screening time-table for applicants who applied for the corps’ recruitment into the different Cadres.
The Corps Public Education Officer, Bisi Kazeem, made the screening time-table available to the News Agency of Nigeria (NAN) on Saturday in Abuja.
The FRSC scheduled its screening and physical fitness assessment on recruitment for Sept. 24 to 29. Kazeem said that the screening recruitment time-table cuts across the 36 states of the federation and the Federal Capital Territory with a total of 57 venues.
He said that the Federal Capital Territory, Kaduna, Lagos and Edo had two venues each.
“Enugu, Benue, Kano,Akwa-Ibom, Kwara, Anambra, Kogi, , Imo, Plateau, Delta, Oyo, Ekiti, Osun,Niger, Ondo, Nasarawa, Cross-River, Katsina, Ebonyi, Adamawa, Rivers, Bauchi, Gombe, Jigawa,Sokoto, Abia, Ogun, Borno, Kebbi, Bayelsa, Zamfara, Taraba and Yobe have one venue each,” he said.
Meanwhile, the FRSC has begun screening of more than 15,000 applicants for various positions in Kaduna State in its ongoing nationwide recruitment exercise.
The officer in charge of the exercise in Kaduna, Assistant Corps Marshal Susan Ajenge, told the News Agency of Nigeria on Monday that the exercise would last for five days.
Ajenge said that out of the 15,000 applicants, 8,000 had first degree, Higher National Diploma, National Certificate in Education and National Diploma, while the remaining had secondary school certificate.
“We will screen applicants’ certificates and check their height, chest and feet to ensure they are physically fit and healthy,” she said.
Ajenge said that those who applied but did not receive e-mail from FRSC inviting them for the screening exercise, could also come for the exercise.
“They should not forget to come along with their credentials, application print out and other relevant documents.
“We want to give everybody equal opportunity. As long as such persons meet the minimum requirements and have applied, they should come; we will screen them,’’ she said.
Some of the applicants, who spoke with NAN, described the exercise as smooth, orderly and well-coordinated.
One of the applicants, Mr Saidi Yekine, said that he was impressed with how the exercise was organised.
He said that the exercise was not stressful and there was no intimidation.
(NAN)
Top Stories