A couple who sold off their baby to raise money for themselves have been apprehended by the police in Rivers State. 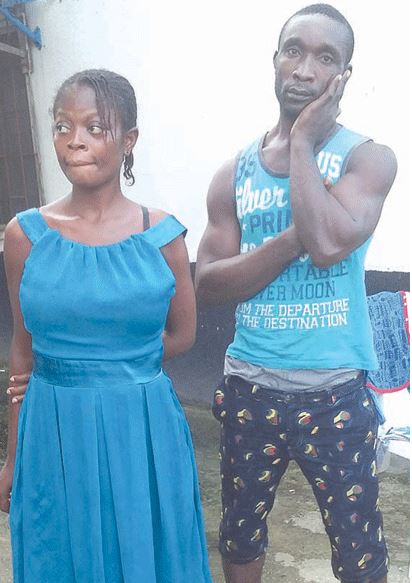 Prime suspect, Eucharia, and husband
Operatives of the Inspector General of Police Monitoring Team in Rivers State have nabbed a couple who sold their day-old baby to a suspected human trafficker.

The family told Sunday Vanguard that they sold the baby to settle debt and relocate from the village to the city.

The couple, according to the Commander in charge of the IGP Monitoring Team in the state, Benneth Igweh, alongside the suspected traffickers, regretted their action, but stated that if they had money they would not have involved the act.

The mother of the baby, Chidinma Richard, 29, narrated that she had fallen sick during pregnancy and borrowed money to treat herself, adding that the husband is a wheelbarrow pusher.

Chidinma also disclosed that her husband, Benson, earlier did not accept her advice to sell the baby, saying he changed his mind after seeing the reality of their situation.

She said: “I am from Isiala Mbano, Imo State. I was arrested by the police because I sold my day-old baby. I sold him for N250, 000 through one Ugonma.

“I never wanted to give birth to another child after two children but this one happened by mistake. When I gave birth to this one, I told my husband that we should sell him.

“My intention was for us to use the money to settle our debt and then relocate to Umuahia in Abia State. All these happened because my husband is not working, we have been living in my village and I wanted us to relocate.

“When I got pregnant again, I was involved in an accident so I borrowed money to treat myself and meet other needs. When they took the baby, I cried, but I had no alternative.”

I bought four children within a year -Suspect

Meanwhile, the prime suspected trafficker, who allegedly bought the baby from the couple, Mrs. Eucharia Jaja, 48, told Sunday Vanguard that she had trafficked four children out of Nigeria within the last 12 months.

“The woman we sold the little baby to has taken him and travelled to Lagos. I sold the baby for N750, 000. I have sold about four children with the last one year that I joined the business.

“We don’t get babies every time; it is not something you get every time. My husband does not know much about the business because he is a tailor.

“What I do is to tell him to drive me sometimes when I want to go and deliver a baby. It is only twice he drove me. I am a nurse before I joined the business”.
Top Stories