The wife of the president, Mrs. Aisha Buhari, yesterday alleged that two powerful personalities have constituted themselves as a cog in the wheel of speedy development of the country. 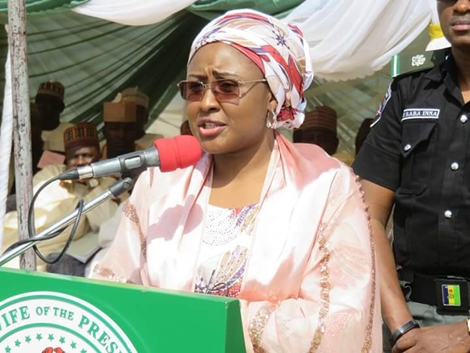 Aisha Buhari
While speaking at a conference organized by Project 4+4 in Abuja, Wife of the President, Dr. Aisha Buhari, on Wedneday, disclosed that two powerful personalities are hindering and frustrating speedy development of the country under her husband's administration.
According to Vanguard, the nation's first lady who did not mention the names of the powerful persons, explained that the government had achieved a lot but could have achieved more or even achieved all it had in one year but for two people in government who will never allow things to move fast.
Aisha Buhari who said that she was disappointed in men who rather than fight these two men will go to them in the night begging for favour, urged Nigerian women to rise and fight.
She said: ”I have realized that Senator Babafemi Ojodu, Special Adviser, political, to the President, and Dr. Hajo Sani, and wife of the Vice-President, Mrs Osinbajo, are not comfortable with my saying this and want me to confine myself to my prepared speech but we must say the truth.”
The First Lady, known for her frank talk when it comes to issues concerning her husband’s administration, insisted that the powerful duo were retrogressive elements preventing the government from moving forward.
She appealed to women to ensure victory for the All Progressives Congress (APC)-led administration in 2019.
According to the Director of Information to Wife of the President, Mr. Suleiman Haruna, the First Lady observed that during the last election, women participated fully in the voting process and ensured that APC was elected, saying that is why the government of President Muhammadu Buhari came up with social investment programmes targeted at them and their children in order to reduce the level of poverty among them.
Top Stories