A suspected kidnapper has been gunned down by police officers in Rivers state during a gun battle. 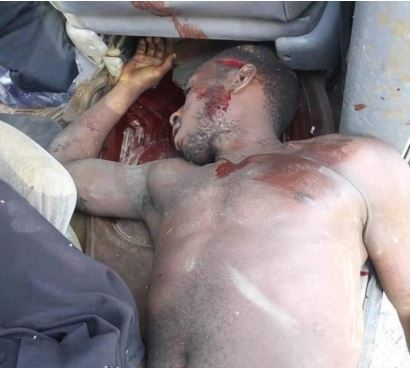 The suspected kidnapper
Operatives of the Federal Special Anti-Robbery Squad (F-SARS) have gunned down a notorious kidnapper/hoodlum along Emohua-Kalabari road in Rivers state.
It was gathered that deceased was killed in a shootout with the security operatives who foiled the gang’s operation.
His corpse has been taken to the state police command as efforts are being made to apprehend other fleeing members of his gang.
Recall that some months ago, security operatives engaged in a gun battle with 3 suspected kidnappers. The suspects were overpowered and shot dead in the gun battle.
The alleged kidnappers were gunned down while trying to abduct a pastor in the area.
An alarm was raised and security operatives who happened to be at the area at that moment were alerted and then engaged in a gun battle with the suspects.
Top Stories