How A Traditionalist 'Disappeared' With Client's N650,000 While Making Special Prayers On It


A traditionalist has reportedly disappeared with a whooping N650k belonging to his client while making special prayers for it. 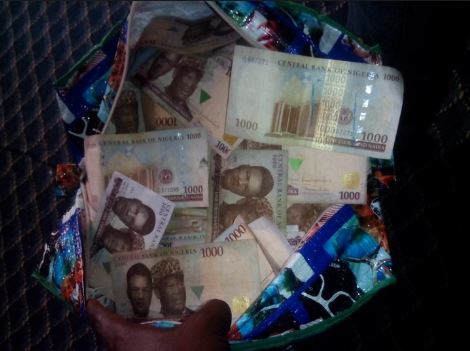 File photo
A traditionalist, Dada Oluwafemi, accused of cheating his client of N635,000 for ‘special prayer,’ on Wednesday appeared in a Grade I Area Court, Nyanya, Abuja, NAN reports.
Oluwafemi, 39, who resides at No 11, Ajalomi Street, Abraka, Delta State, is charged with two counts of criminal breach of trust and cheating.
The Prosecutor, Fidelix Ogube, told the court that Mr. Ernest Mmadu of FHA Lugbe, Abuja, reported the matter at Garki Police Station on July 24, 2017.
Ogube told the court that sometime in July 2017, Oluwafemi spoke with Mmadu, who claimed to be a pastor.
Ogube alleged that the defendant (Oluwafemi), during conversation with the complainant (Mmadu), convinced him that he had a spiritual problem.
The prosecutor said the complainant withdrew N635,000 from the bank and gave it to the defendant to pray on it.
“While pretending to be reciting the special prayer, the defendant took off with the bag full of money,” he said.
Ogube said that during Police investigation, the defendant was tracked down and arrested at Ninth Mile, Enugu State.
The prosecutor said the offence contravened the provisions of sections 312 and 322 of the Penal Code.
After the charge was read to Oluwafemi, he pleaded guilty.
The judge, Mr. Abdullahi Ogedengbe, admitted the defendant to bail in the sum of N50,000, with a reliable surety in like sum.
Ogedengbe ordered that the surety must reside within the court’s jurisdiction.
He adjourned the case until June 18 for hearing.
Top Stories