Here are some interesting facts about the richest man in the world, Jeff Bezos many people do not know about. 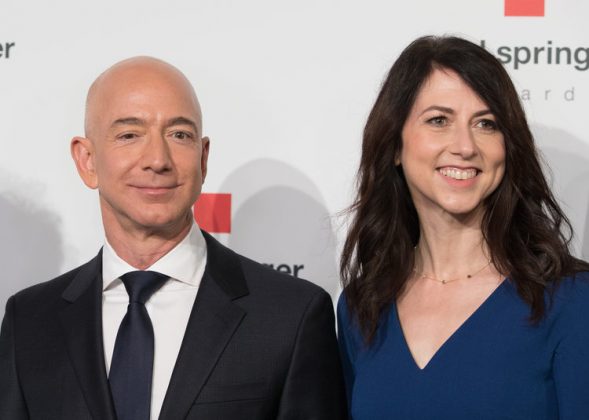 Jeff Bezos and former wife, Mackenzie Bezos
Jeff Bezos is the richest man in the world (2019) with a staggering fortune of about $131 billion fortune.
Here are some important facts you may not know about him:
1). Jeff Bezos is an American techie, currently the CEO and founder of Amazon.
2). Amazon in 2019 became the world’s biggest company with market capitalisation of about $797 billion.
3). He was born on January 12, 1964. He’s 55 years.
4). Jeff is from Albuquerque, New Mexico but was raised in Houston, Texas.
5). He is an alumnus of Princeton University with degrees in electrical engineering and computer science.
6). He is a cousin of country singer George Strait.
7). He worked as a chef at McDonald during his High school days.
8). He founded Amazon in his garage.
9). He invested an estimated $300,000 in Amazon which he got from his parents.
10). Jeff borrowed $2 billion from banks after Amazon nearly went bankrupt in 2000.
11). He is the founder of Blue Origin, an American privately funded aerospace manufacturer and sub-orbital spaceflight services company.
12). He is worth an eye-popping $131 billion.
13). Jeff is the owner of The Washington Post. He bought it on August 5, 2013, for $250 million in cash.
14). Bezos first became a millionaire in 1997.
15). On January 9, 2019, after 25 years of marriage, he divorced his wife, MacKenzie Bezos.
16). MacKenzie Bezos gave him 75% of their Amazon stock plus voting control of their shares.
17). Jeff and MacKenzie have four children: three sons, and one daughter adopted from China.
18). He survived a helicopter crash In March 2003.
19). He featured in the movie, Star Trek Beyond in 2016.
20). Jeff Bezos is reportedly dating entrepreneur and former TV anchor Lauren Sanchez after being accused of extramarital affairs with the woman by The National Enquirer.
Credit: Famoususa.com
Top Stories