The 29-year-old had established himself as the world's leading heavyweight by so memorably retiring Wladimir Klitschko in 2017. 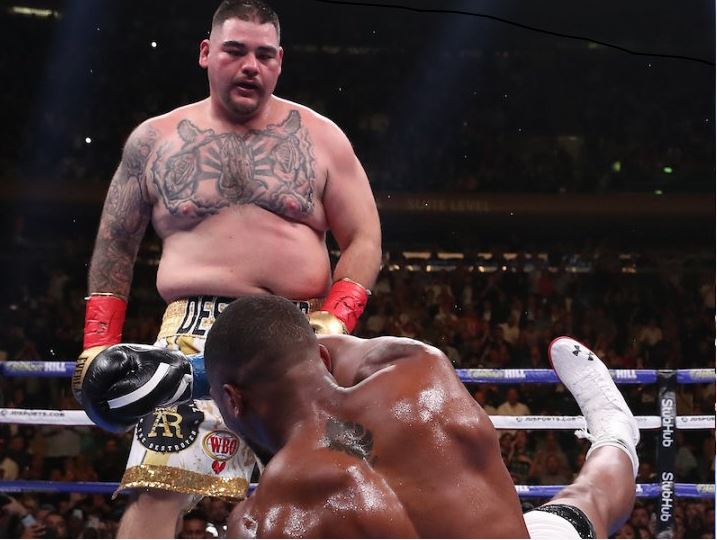 Andy Ruiz and Anthony Joshua
Anthony Joshua has targeted an immediate rematch with Andy Ruiz Jr after losing his IBF, WBA, IBO and WBO heavyweight titles in a shock defeat at New York’s Madison Square Garden.
On the occasion of his US debut and despite being the significant favourite against an opponent who had been given little more than a month’s notice and had lost his only previous world title fight, Joshua suffered four knockdowns in what became a one-sided upset.
He was eventually rescued in the seventh round by referee Mike Griffin when, after returning to his feet for the fourth time — the two knockdowns in the seventh followed two similarly hurtful ones in the third, which came after Ruiz Jr’s only knockdown — he was no longer able to defend himself.
Referee Mike Griffin, centre, stops the fight.
The 29-year-old had established himself as the world’s leading heavyweight by so memorably retiring Wladimir Klitschko in 2017, but so unexpected a defeat has damaged his reputation, contributing to his desire for a rematch in the winter.
Joshua’s promoter Eddie Hearn, who had previously secured the now-suspended Jarrell Miller as his opponent, also revealed that the UK is the likeliest venue for the rematch that can be expected to follow.
“We didn’t know what was coming next, in November, December, now we do,” Hearn said. “But there’s a lot of pressure on that fight; the rematch is huge.
“For me, it should be the UK, but we’ll sit down as a team and look at everything.
“I know it didn’t go our way but we said we wanted to create a night that people would remember for a long time; unfortunately they’ll remember it for a shock defeat and an incredible night of boxing.
“But that’s okay; revenge will be sweet and I believe he’ll get it.”
Top Stories