The long arm of law has descended on two alleged fraud 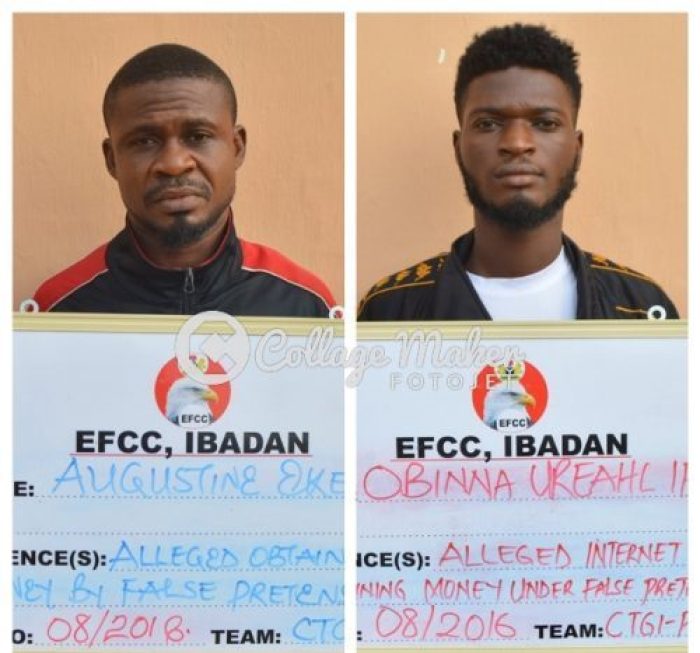 The suspects
The Economic and Financial Crimes Commission, Ibadan zonal office has arraigned two persons for allegedly defrauding one Akinbuluma Mobolade Dele, a lecturer and doctoral student in the Department of Crop Protection and Environmental Biology, University of Ibadan.
The suspects – Augustine Ekeson and Obinna Ureahl – were brought before Justice Patricia Ajoku of the Federal High Court, Ibadan Division on a three-count charge bordering on impersonation and obtaining money under false pretence.
In a petition to the Commission, dated February 17, 2016, Akinbuluma detailed how the duo allegedly conspired together to defraud him of a sum of N875,490 in December 2015.
The sum was the naira equivalent of US$4,169 payable for consumables needed in a six-month bench space research he was to undertake at the International Centre of Insect Physiology and Ecology in Nairobi, Kenya as part of his doctoral programme.
Akinbuluma, who got a grant from the premier university for the research work, said he had been in constant communication with the leadership of the Kenyan centre before the accused hacked into his email account and took advantage of the strain to dupe him.
After hijacking the account, the accused presented themselves as Prof Baldwyn Tonto, Akinbuluma’s supposed supervisor at the centre, and demanded that he paid the naira equivalent of the due sum to a colleague’s Nigerian bank account for transmission to the centre’s account in Kenya.
The offence, according to the charge sheet, was contrary to Section 1 (1)(b), section 6 and 8 (b) of the Advanced Fee Fraud Related Offences Act 2006 and Section 22 (4)(a) of Cybercrimes (Prohibition, Prevention etc) Act 2015.
When the charges were read to them, the accused persons pleaded not guilty.
Consequently, the prosecution counsel, Babatunde Sonoiki, prayed the court for a trial date and the order to remand the defendants in prison custody.
The court has adjourned the case to June 20, 2019 for trial and ordered that the defendants be remanded in prison custody.
Top Stories