Two kidnappers have been nabbed after they were found out to have abducted pupils from a school in Anambra. 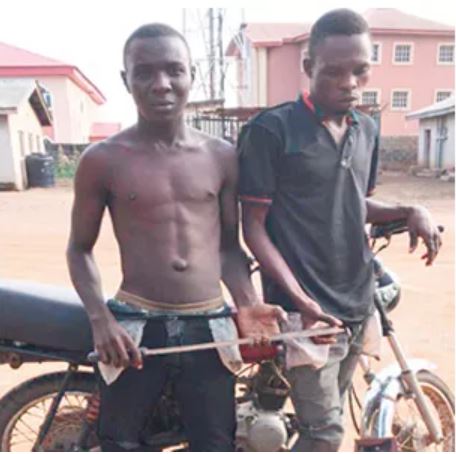 The suspects
Police in Anambra State have arrested two suspected kidnappers, who allegedly abducted two kids from their school and hid them in a hotel, NewTelegraph reports.
The suspects are Maduako Chukwuka (23) and Michael Chukwuebuka (22).
The pupils are Chinezerem Nkwoemezie (10) and Nzube Nkwoemezie (8). The pupils are both males and are from the same parents.
The state Police Public Relations Officer (PPRO), SP Haruna Mohammed, said that on June 4, following intelligence report, Police detectives attached to Isiowulu Division arrested Chukwuka and Chukwuebuka.
He said: “The suspects abducted two kids, both males of same parents. They were abducted from their school on June 3 at Odume, Obosi and were hidden inside an isolated hotel in Onitsha.
"Police detectives traced the hotel, rescued the victims unhurt and arrested the hoodlums. The case is under investigation. The suspects will be charged to court for prosecution.”
Top Stories