In what will come across as a really shocking development, a so called church which 'doubles' people's money has scammed many in Lagos. 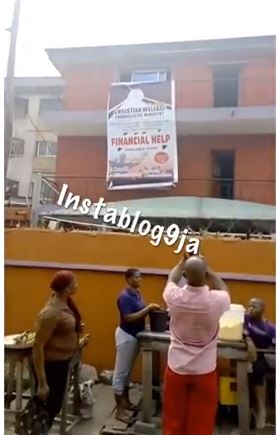 The scene of the incident
It has been reported that many people have been scammed after a 'church' which specializes in doubling people's money, took off with their savings.
The very incident occurred in Apapa in Lagos state, leaving many victims shocked.
Local reports show that the church called Christian Welfare Evangelistic Ministry, usually asked people to bring their money to it with the promises that the cash will be doubled within two weeks.
People had been bringing in their money to the church with hopes that their cash will doubled in two weeks. However, earlier today, it was discovered that the operators of the church have disappeared. Those who came to get their money could not find the people they gave their money to.
The incident has caused quite a stir in Apapa leaving many people absolutely distraught.
Watch a video from the scene of the incident below: