The lawmaker said this while contributing to the valedictory session to mark the end of legislative business for the Eighth Senate on Thursday. 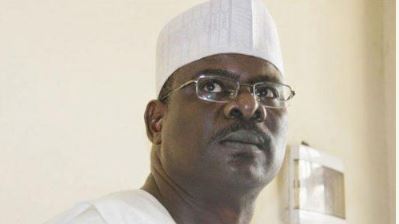 Mohammed Ali Ndume
An aspirant for the President of the Senate, Mohammed Ali Ndume, has warned that the independence of the Ninth National Assembly may be under threat.
He called on lawmakers to work to protect its independence to avoid turbulent sessions.
Ndume also singled out Senator Dino Melaye and apologised to him “if I offended you during my stay in the Eight Senate.”
Ndume, representing Borno South in the upper legislative chamber, noted that the only thing every parliament has going for it is its independence which it must guard zealously.
The lawmaker said this while contributing to the valedictory session to mark the end of legislative business for the Eight Senate on Thursday. The Borno born politician said that the difference between democracy and military government is the independence of parliament.
Ndume said, “We had loads of disagreements. I respect your resilience and your ability to stand for what you believe in. We started together and we were doing fine. What happened was part of the learning process.
“My concern is the independence of this arm of government. That is not to say we must not work with the other side (Presidency).
“I see a dangerous thing coming. The only thing that makes democracy different from military rule is the Parliament. We need to ensure the independence of the Parliament.

“If we take away the Parliament, what we have is not democracy. I am one of those that were controversial in the last four years. Within the process, we may have offended one another. I take nothing personal.
“This institution is very important. Let us protect the sanctity of the parliament. This is the Nigerian Senate. There is no APC or PDP Senate. This is the Senate of the Federal Republic of Nigeria.
“We will continue to support the other side but we must work at all times to protect the sanctity of the institution of the parliament. We must continue to enhance the sanctity of the Senate at all times.”
Top Stories