Melaye said he only campaigned for just four days for his re-election bid in the February 23, 2019 election. 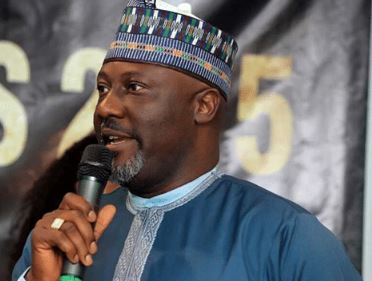 Dino Melaye
The irrepressible senator representing Kogi West senatorial district, Dino Melaye disclosed that he was in Police detention for 124 out of the 365 days in the year 2018.
Revealing his ordeasl and political persecutions to his colleagues during Thursday’s valedictory session of the 8th Senate, the eloquent lawmaker who sang a hymnal song to the admiration of others, said he only campaigned for just four days for his re-election bid in the February 23,2019 election.
Melaye added that ”I was in police custody when the recall process failed woefully. I am here to thank God because in 2017, I was arrested eight times. In 2018, I was arrested 18 times and out of 365 days in 2018, I spent 124 in police custody. I campaigned only four days to the 2019 election.”
He praised the leadership qualities of outgoing Senate President Bukola Saraki while condemning the shameful involvement of one of his colleagues, Senator Ovie Omo-Agege in the notorious mace stolen saga.
Top Stories