He also called on the president and other attendees to add value, create wealth, while fighting corruption, and not merely to fight corruption. 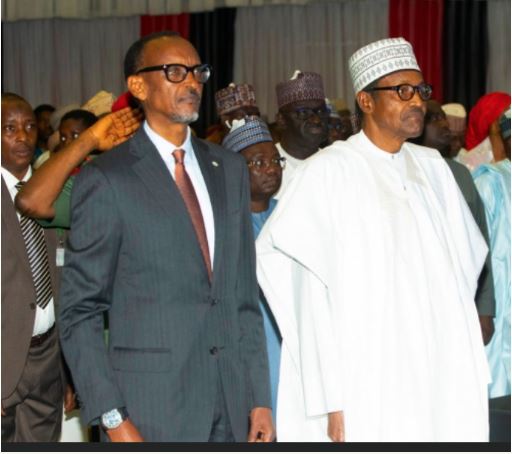 Paul Kagame and President Muhammadu Buhari
Rwandan President, Paul Kagame, says President Muhammadu Buhari and other African leaders must refocus their efforts and passion on creating value, wealth and should stop fighting corruption endlessly.
Speaking at the Economic and Financial Crimes Commission (EFCC) summit in Abuja, Kagame congratulated Buhari on his victory at the poll and said Nigeria must share resources equitably, so everyone can join the fight against corruption.
He also called on the president and other attendees to add value, create wealth, while fighting corruption, and not merely to fight corruption.
“There is one of your own [Ngozi Okonjo-Iweala], who wrote a book, titled, Fighting Corruption is Dangerous; so she gave me the book, and as I was looking at the title, I reminded her and said you need to be thinking of writing another book to state that not fighting corruption is even more dangerous.
“This is a fight that can be won; tolerating corruption is a choice, not an inevitability. It is within our power to end it. That is the most important starting point, otherwise, it will be a waste of time to keep talking about it.
“Corruptions does not take decades to eradicate once we decide to break the habit.
“We have to set our sights high, it is not enough to fight corruption just as merely fighting poverty, it is too small an ambition for Africa. We want to create value, we want to create wealth, not merely fighting corruption.”
Kagame said Buhari is AU anti-corruption champion, appreciating the president for his drive against corruption.
“President Buhari, I wish to give you our very warm congratulations on your re-election and best wishes for the entire Nigerian people, on the road ahead,” Kagame said.
“I also want to mention here, that President Buhari is AU (African Union) champion in the fight against corruption, and we thank you.”
Kagame said corruption must be fought from top to bottom, using four key principles, “culture, responsibility, accountability, and effectiveness”.
“We must discard the myth that corruption is endemic to particular cultures. corruption is a universal weakness, not an African one, and it is not part of our destiny as a continent.
He said research has shown that “the biggest sources and beneficiaries of corruptions are outside of Africa”.
Top Stories