Oyetola Cries To Buratai As Criminals Take Over Osun


Oyetola raised the alarm at the headquarters of the Nigerian Army when he paid a courtesy visit to the Chief of Army Staff, Lt. General Tukur Buratai. 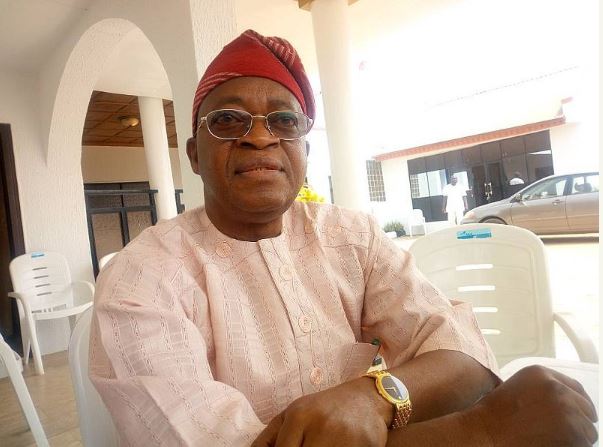 Osun State Governor Gboyega Oyetola
Osun State Governor Gboyega Oyetola, yesterday, cried out over the rising spate of kidnapping, banditry and armed robbery in the state calling for deployment of a joint patrol outfit to tackle the security challenges.
This came as Governor Seyi Makinde of Oyo State expressed his determination to provide adequate security measures to forestall such occurrence in the state.
Oyetola raised the alarm at the headquarters of the Nigerian Army when he paid a courtesy visit to the Chief of Army Staff, Lt. General Tukur Buratai.
The governor said he was at Army headquarters to commend the COAS for approving the construction of a Bridge across the Osun River to Ede, which will greatly assist the state by boosting the economic wellbeing on the people.
He said: “I am here to bring to your knowledge that the spate of crime is increasing in Osun and around us. It is giving me a serious cause for concern and as you know, the primary function of government is to ensure security for the people for economic progress and development.
“To address these challenges, the state (Osun) has decided to establish a joint patrol operation comprising the Police, Nigerian Army and the NSCDC. I have written to your office in this regard but I deemed it important to come see the Army leadership due to the concern I attach to tackling these security challenges.
“Though we, in Osun State, are challenged by paucity of funds, we are prepared to support the security agencies with vehicles, equipment because crime is on the increase.”
Responding, Buratai said: “Your presence here today shows level of commitment you have for the security of the state. We will do everything possible to support the effort because fighting crime is part of our constitutional responsibility.”
Reassuring the governor on the request, the COAS said: “Your request is well understood. We must do it responsibility. We will do everything to ensure the Army unit in Osun is properly equipped.”
Makinde vows to stop kidnapping
Meanwhile, Governor Makinde assured the people to keep the state safe from bandits.
The governor gave the assurance following calls by members of the Nigeria Association of Women Journalists, NAWOJ, Nigerian Union of Journalists, NUJ, and other stakeholders who were at the state secretariat, Agodi, Ibadan on a peaceful demonstration to call attention of the government to the increasing spate of kidnapping and banditry in the country.
The peaceful walk tagged: Walks for Stop The Kidnapping Now took off from the ancient Mapo Hall, Ibadan, before terminating at the Agodi State Secretariat.
Speaking through his Chief of Staff, Chief Bisi Ilaka after receiving the protesters, the governor assured that the security of lives and property of people of the state remains paramount in his mind and would always make it a top priority.
Ilaka said: “Governor Seyi Makinde is a governor that understands his duties and responsibilities as the Chief Security Officer of this state and I know and speak without any fear of contradiction that he owes the life of every single person in this state sacred and he will not tolerate or allow any pervading insecurity around Southwest to extend to Oyo State.”
“I am sure the governor will use his office to champion the cause for a secured Southwest. I also know that our father that we all know, Chief Olu Falae who is a leading light in the Afenifere movement also suffered in the hands of these obnoxious individuals who are popping up all over the place. We say to you, we will not allow such to happen in Oyo State.”
Top Stories