God Is Responsible For My S*xy Shape - Actress Omobutty


At one point, some even alleged that the actress had gone under the surgeon's knife, a claim she vehemently denied. 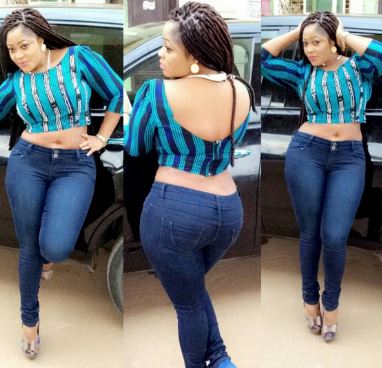 Omobutty
Actress, Biodun Okeowo, aka Omobutty, has often been said to have one of the sexiest bodies in the Yoruba section of the movie industry. In the same vein, different people have put forward claims on what they believe is responsible for her eye-catching figure despite being a mother of two.
At one point, some even alleged that the actress had gone under the surgeon’s knife, a claim she vehemently denied.
Meanwhile, the LASU graduate of Yoruba Communication Arts never fails to upload her pictures on the Internet, which usually leaves her followers drooling, with many of them admiring her. Needless, to say, it has become a selling point of hers.
Omobutty uploaded a picture on her WhatsApp status during the week which had all her curves on display and in a witty chat with Sunday Scoop, she finally revealed the secret of her ‘banging body.’
“How have you been able to maintain this sexy shape?” a correspondent asked, and she simply replied, “It’s God,” accompanied by a laugher emoji.
The Oro Oka actress also had a lot of people gushing recently when she posted a picture with her son. The teenager is already taller than her.
Top Stories