The Qatari businessman revealed that the club will show any player who exhibits such an attitude the exit door. 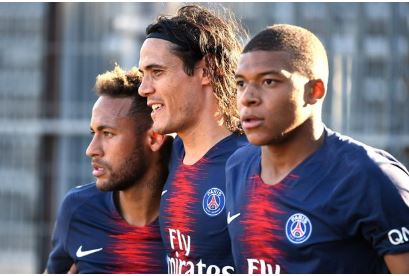 Neymar, Cavani and Mbappe
Paris Saint-Germain president, Nasser al-Khelaifi has issued a warning to the club’s players, stating that he will no longer put up with any ‘celebrity behaviour’.
The Qatari businessman revealed that the club will show any player who exhibits such an attitude the exit door.
The Ligue 1 champions have long suffered from rumours of unrest in the playing squad, dating as far back as early 2018 when Edinson Cavani and Neymar Jr. reportedly had to be separated in the dressing room following an argument over penalty taking duties.
Speaking to France Football magazine, Al-Khelaifi says he is no longer willing to stand for any such behaviour from the club’s star-studded squad in future.
He said, “I do not want to have any celebrity behaviour anymore.
“Players will have to assume their responsibilities even more than before.
“It must be completely different. They will have to do more, work more.
“They are not here to please themselves. If they do not agree, the doors are open!”
PSG’s change in direction comes as a result of recent changes to their off-pitch personnel as the club announced that Leonardo Araujo would be replacing Antero Henrique as sporting director for a second spell.
It was reported that Neymar Jr., Cavani and Kylian Mbappe are some superstar footballers in PSG.
Top Stories