Meet Bashir Dahiru, The Gang Leader Who Posed As An IRT Operative To Rob Innocent People


A gang leader, Bashir Dahiru who posed as a member of the Special Intelligence Response Team to rob people, has been nabbed. 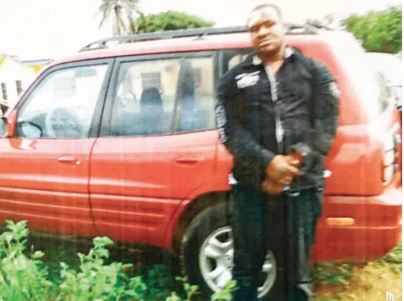 Bashir Dahiru
According to a report by NewTelegraph, the police in Niger State have arrested a car-snatching gang leader, Bashir Dahiru, who used to pose as operative of the Inspector-General of Police (IG) Special Intelligence Response Team (IRT) to rob unsuspecting Nigerians.
The police, while confirming the arrest of Dahiru, disclosed that the suspect used to operate within the Federal Capital Territory (FCT), Abuja and other neighbouring states.
The state Police Public Relations Officer (PPRO), Muhammad Abubakar, said that Dahiru had confessed to the crime.
Abubakar said: “Recovered from the suspects are two fabricated master keys, fake Inspector-General- of Police (IGP) Special Intelligence Response Team (IRT) identity card bearing the suspect’s name and a Peugeot car with registration number DRA 302 JWS believed to have been abandoned by his gang members that escaped.
“The police have intensified effort to arrest the fleeing members of his gang, and the matter would be charged to court after investigation.”
The suspect, who hails from Suleja Local Government Area of the state, was trailed and arrested after a tip-off by a team of policemen attached to area command’s office.
Dahiru was caught attempting to steal a Toyota RAV-4 with registration number BWR 302 PZ, from where it was parked in Suleja.
It was learnt that the suspect and his gang members had been in the business of stealing cars for years.
Dahiru said: “I rely on informants and gang members for information on cars target and where they are parked. I operate on Suleja Road and beyond, depending on the location of the vehicle.
“My modus operandi is to unlock parked cars with master key before stealing them. Allah knows that I have tried to stop the act, but I couldn’t. The worst is that I can’t even state what I do with the proceeds from the crime.”
Top Stories