The Super Falcon may still qualify to the knockout stages of the FIFA Women's World Cup even with their loss to France. 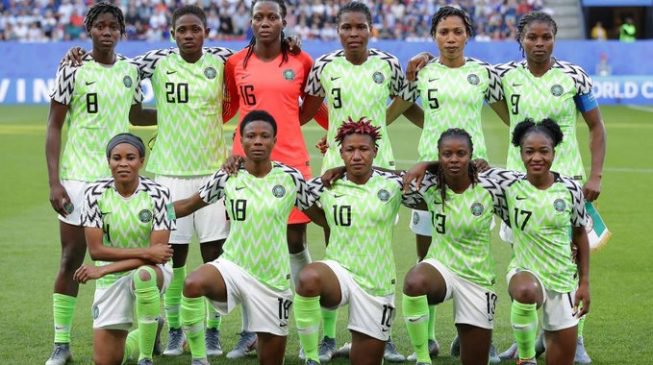 Super Falcons
“Ten-man” Super Falcons were pipped 1-0 by the host nation, France, at the 2019 Fifa Women’s World Cup at the Roazhon Park, Rennes.
Falcons conceded a penalty in the 79th minute which Wendie Renard scored following a re-take.
Before the penalty, Ngozi Ebere was shown a red card which depleted the nine-time African champions from eleven to ten.
The Super Falcons were able to keep their defensive discipline and heads after conceding via penalty, but that was not enough.
Les Bleus enjoyed most of the possession in the first half but never lead to anything.
Super Falcons were largely played in their half few instances where France had found themselves with clear-cut chances.
Young fullback Chidinma Okeke continued with her impressive performance in her first Fifa Women’s World Cup, as did Halimatu Ayinde in her screening role in the midfield.
Nigeria’s defense was compact, disciplined, and aggressive throughout the first forty-five minutes just like the team’s handler, Thomas Dennerby, said before the match.
“We always try to play aggressive defending. Aggressive for me is to use your body, run fast to press, to go to your position as fast as you can,”Dennerby said.
France wave of attack continued in the second half of play which saw Ebere concede a penalty and handed the marching order with a second yellow card for the poor challenge.
Renard hit the lower bar but Nnadozie was penalized for going off her line in the 76th minute before she kicked the ball from the spot.
Video Assistant Referee (VAR) called for a re-take of the penalty and which Renard converted.
Nigeria will have to wait to know their faith if they will qualify as one of the best four losers for the knock out round.
Nigeria (if they qualify), they will face either Germany who are top group B already or Italy who are top of Group C
France and Nigeria met at the 2011 FIFA Women’s World Cup, and Marie-Laure Delie’s goal emerged as the match-winner.
Top Stories