The suspect attacked the POS attendant with a knife before stealing all the money she made for the day. 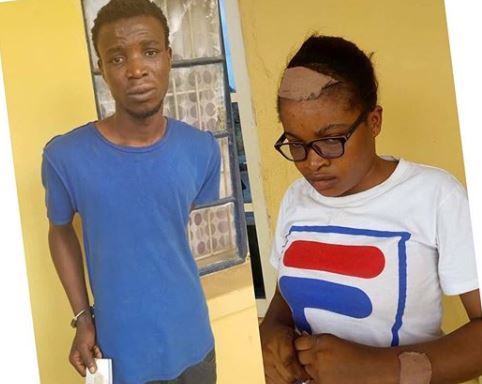 The thief attacked the POS attendant before stealing her money
Security operatives have arrested a 24-year-old NCE graduate of Maths/Computer from Adeniran Ogunsanya College of Education, Otto-Ijanikin, Lagos, after he attacked and stole from a female POS attendant  in Ijoko, Ogun State.
Afolayin Sunday had, on June 6, 2019, approached Adesina Omolola at a POS point, under the pretence of wanting to transact a business, only to dispossess her of the cash sales already made.
The Ogun State Police Public Relations Officer (PPRO), DSP Abimbola Oyeyemi, said: "the suspect grabbed her on the neck and brought out a UTC knife.”
Having instilled fears in his victim, Sunday took control of the shop, ransacked the lady's drawer and made away with N42, 000.
He was eventually arrested after Omolola regained consciousness and raised an alarm. Investigations revealed that the suspect has a history of attacking POS shops.
He was said to have, in the same manner, robbed and injured two female attendants, Abimbola Oyebolu and Ibrahim Oluwadamilola on April 17 and May 31, 2019, respectively.
Top Stories