The story has been told of a woman who has a mysterious condition that causes her breasts to grow uncontrollably. 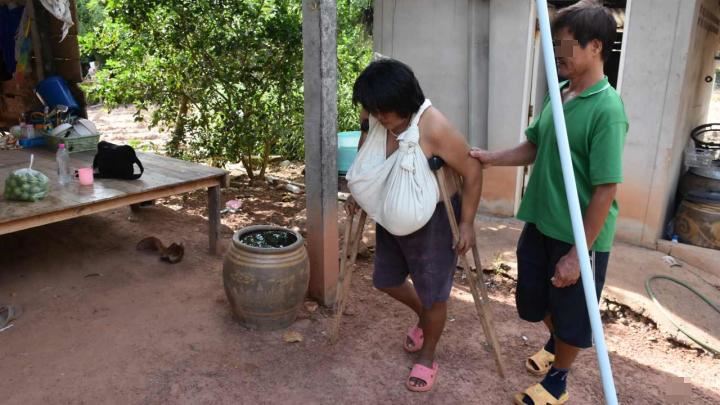 The woman with a strange condition
A 46-year old Thai woman recently issued a public cry for help after her breasts suddenly started to grow a few months ago, leaving her unable to work or even move around without using crutches.
Thai media recently presented the case of Lam Phrai Si Nuan, a 46-year-old woman from a village in the country’s Phitsanulok province, whose breasts started growing around 9 months ago and have no become so big and heavy that she needs crutches to walk.
Mrs. Lam Phrai says she has seen doctors about her mysterious condition, and although they eliminated the possibility of cancerous tumors, they were unable to diagnose her or provide a treatment. Due to a precarious financial situation, the woman cannot afford a more thorough medical investigation and has appealed to kindhearted people for assistance.
The woman told reporters that she first noticed her breasts were growing three years ago, but that the rate at which they grew increased 8-9 months ago, when her left breast became considerably larger than the other.
Then, about 5 months ago, the right one started catching up, and now both her breasts have literally become a burden for Lam Phray, who needs to wear a heavy cloth tied behind her neck to contain her growing bosom.
The weight of Lam Phrai Si Nuan’s breasts puts constant pressure on her spine, and she suffers from excruciating neck, shoulder and back pain. To make matters worse, the added weight has rendered the 46-year-old woman unable to move around without wooden crutches.
After several visits to Phutthachinarat Hospital, the woman still doesn’t know why her chest is constantly growing, just that it isn’t tumors. One of the doctors told her that they could simply remove her breasts, but they first need to know what is causing their unusual growth. Lam Phrai has been scheduled for a more thorough investigation on July 19, but since neither her nor her husband – who is still recovering after a motorcycle accident – are working right now, she cannot afford to pay the medical bills.
Through the media, Lam Phrai has appealed to the general public for financial support to hopefully have her condition properly diagnosed and treated.
Watch a video of the woman below:
***
Source: OddityCentral
Top Stories