Chairman of the Nigerian Union of Traders Association said they have been forced to close the shops, and their attackers are demanding that they return to Nigeria. 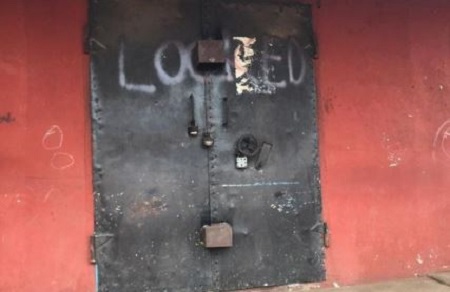 One of the locked shops (Photo credit: Luv Fm, Ghana)
At least 20 shops belonging to Nigerians were forcibly locked at Suame Magazine in Kumasi, Ashanti region of Ghana, on Monday.

According to GhanaWeb, the traders said they were being targetted over the alleged involvement of Nigerian nationals in kidnappings in Ghana.

Four Nigerians had been arrested over the alleged kidnap of two Canadians.

The arrested suspects were reported to have abducted Bailey Jordan Chitty and Lauren Patricia Catherine Tilley who were volunteering in Ghana.

Kizito Obiora, the chairman of the Nigerian Union of Traders Association, was quoted to have said the attack started last week.

He said they have been forced to close the shops, and their attackers are demanding that they return to Nigeria.

He added that when the attacks started, the police intervened but some unidentified young men returned on Monday to forcibly lock up their shops.

Some Ghanaian traders, however, said they were not out to intimidate foreigners but to encourage authorities implement the statutory laws without fear or favour.

They said most foreigners in the retail business were just selling their wares without paying taxes.

They also accused Nigerian of selling substandard products described as a threat to consumers.

“Because of the Nigerians traders, most of the customers do not patronise the products of the Ghanaians as they are deemed as expensive. They have destroyed Kumasi with their new substandard spare parts,” one of them was quoted to have said.

The police command in the area had since commenced investigations into the matter.

Earlier, Olufemi Abikoye, Nigeria’s high commissioner to Ghana, had expressed concerns over the manner in which the Ghanaian press had been “prioritising” negative reports about Nigerians.

In a statement he personally signed, Abikoye appealed to the Ghanaian media to stop referring to Nigerians based in Ghana as a bunch of criminals.
Top Stories