The tallest man in Nigeria has opened up about his life and struggles, explaining that he is finding it hard to find love. 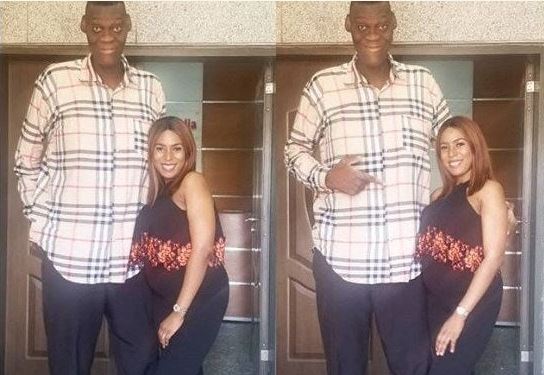 Afeez and Linda Ikeji
Think you’re tall? Wait until you stand beside Afeez Agoro Oladimeji. Unofficially regarded as the tallest man in Nigeria, Oladimeji carries a burden of height, which he says initially denied him of relationships and caused him so much inconveniencies. However, the 44-year-old is cool now and tells Adeola Ogunlade that the government should consider him as the nation’s Tourism Ambassador.
His arrival stirred the whole gathering and literally put all proceedings on hold. Heads turned, mouths opened wide and eyes popped, almost out of their sockets. It was the closest thing they had seen to the biblical Goliath – except that this one wasn’t barrel-chested like the holy book had made them believe. A 7-footer of a man? Surely they weren’t dreaming, as they took another look at the specimen again.
He had to bend almost doubly – albeit, with some help – to come into the hall, before making straight for the podium.  There, he stood for a brief awkward moment, as organisers of the day’s event searched frantically for a suitable seat for him.
As he settled in the chair beside popular disc jockey, DJ Jimmy Jatt, CDQ and the founder  of Celebrity and Fans Relationship Manager (CFRM), Ademola Fawaz, you could tell it was huge relief for him, as he looked to have had a stressful day.
The occasion was at a Lagos A-list hotel, where students from primary to tertiary institutions had gathered to savour rewards of a quiz competition they had participated in online, tagged ‘Get Help Merit, by Celebrity and Fans Relationship Manager, sponsored by popular hip-hop artiste, Sadiq Abubakar Yusuf popularly known by the stage name, CDQ.
They had been asked to name 10 things they knew about the artiste and hip-hop music in Nigeria, of which four lucky students from Oyo and Lagos States emerged winners.
The MC of the day wasted  no time in satisfying their curiosity. “His name is Afeez Agoro Oladimeji, the tallest man in Nigeria,” he announced almost with glee. Everyone in the hall clapped. Thereafter, he quite clearly stole the show, as everyone, including the winners made him their object of attention.
As the event came to an end, Oladimeji stood up to take his leave, but the admiration wouldn’t just abate, not even the foreign guests were left out. But like a man who has been used to that treatment, he took it all in his stride and walked out of the venue, smiling and waving. Several guests, including this reporter, who had fancied himself a tall man, struggled to take photographs with Oladimeji, sizing up their diminutiveness, as it were.
That was penultimate Wednesday. However, for this curious reporter, that was never going to be the end of the story.
At home with ‘Mr Tallest’
On Monday, he put a call through to him for an interview request, but that was another awesome experience. In all his over three decades on planet earth, this reporter could swear he had never heard such deep baritone voice. Where on earth did this guy emerge from?
Appointment sealed, a date was set for a proper engagement.
Both parties agreed to meet at a Motherless Babies Home opposite CMS Grammer School, Bariga, not too far from his home.
Afeez Agoro Oladimeji was born in Sabo, Yaba, in metropolitan Lagos on December 13, 1975. He is the youngest of his mother’s three children, who is second wife to his father. His earliest childhood memories were of that community, but he later moved with his family to nearby Akoka at age seven, where he grew up and attended St. Finbarr’s College. He later obtained an Ordinary National Diploma (OND), followed by a Higher National Diploma (HND) in Town and Regional Planning at the Lagos State Polytechnic. He followed it up with a degree in Computer Science at the University of Lagos.
As much as he could recall, nothing in his childhood suggested he was going to end up this tall. “My growing up was a miracle in a way. All through my secondary school days, I was not even one of the tallest students. But right after secondary school, I started feeling that I was growing tall. Ten years after secondary school, some of my mates who hadn’t seen me for long started telling me I was no longer the same Oladimeji they knew. They said I had become an alien because I was twice as tall as them.”
As the years rolled by, Oladimeji said he faced lots of health and physical challenges. At age 19, he took ill, and the condition brought about a rapid growth that was strange to all. He fell ill several times after and consequently grew taller. All medical attempts to control the strange growth failed, and today, he stands at a towering 7ft.4 inches. That, as far as available records can testify, makes him the tallest man in Nigeria, and one of the tallest in Africa.
However, when asked if he ever wished he wasn’t this tall, the giant of a man said, “No, I wouldn’t say that, because this height has become a blessing to me. I have met several people who have extended their hands of love toward me on account of my unique height.”
He recalled how when he applied to go the United State of America, he was given a Visa almost effortlessly, because the Consular General told him there was no way he could escape. “I was given a Visa and I spent six months in the United States and my experience there was awesome and memorable.”
Aside that, he said, “In my area, people treat me like a special being; they treat me so well. In fact, I get a lot of support from people everywhere I go.” 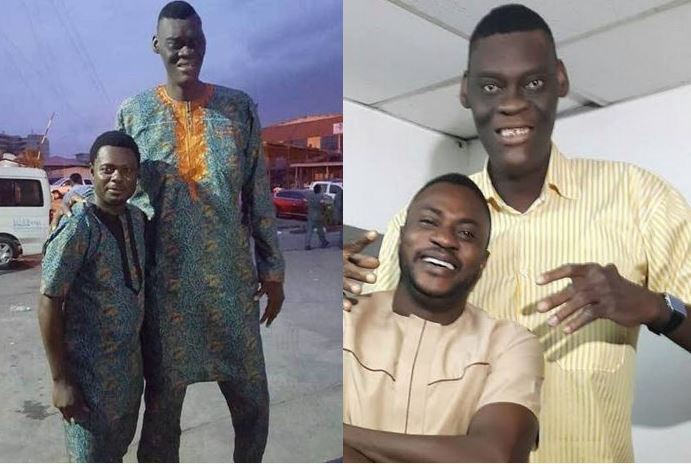