The figure of casualties was given by a spokesperson of the group in an interview with Chinese news agency Xinhua. 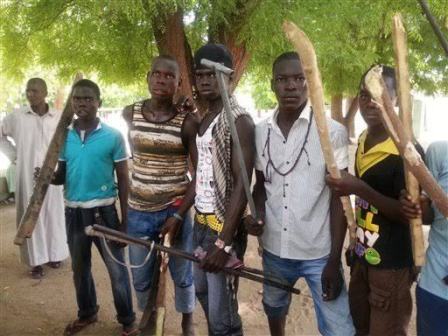 Civilian Joint Task Force
At least 1,000 members of the Civilian Joint Task Force (CJTF), a pro-government militia fighting the terror group Boko Haram in Nigeria’s northeast region, have been killed in six years.
The figure of casualties was given by a spokesperson of the group in an interview with Chinese news agency Xinhua.
Jubril Gunda, the spokesman who also doubles as the legal adviser of the CJTF, said the figure was collated between 2013 and 2019.
The CJTF, which was formed in 2013, comprises of different vigilante groups of young men armed with sticks to patrol and protect their local communities, especially in Borno State, the birthplace of Boko Haram following the indiscriminately launched attacks by the terror group in Maiduguri and other locations since 2009.
Gunda said the militia group members were killed during various operations while assisting Nigerian security agencies in the fight against the Boko Haram. Boko Haram has been blamed for the death of more than 20,000 people and displacement of 2.3 million others in Nigeria so far.
Due to the geographical spread and proximity of the CJTF to the general public, many Boko Haram atrocities were curtailed with their support, resulting in the loss of their (CJTF) own lives in the fight, the group’s mouthpiece told Xinhua in Maiduguri.
The group also has female members, with over 26,000 active members in Borno and the neighboring Yobe State, of which only 1,800 receive salaries (50 U.S. dollars per month).
“They were trained to carry out life-threatening volunteer activities. They are unarmed and carry only personal and locally donated swords, daggers, sticks and bows and arrows,” Gunda said.
During day and night routine raids, many terrorists were caught in their hideouts, arrested and handed over to local security agencies for further actions or interrogation.At such times, hundreds of members of the CJTF also sustained various degrees of injury, he said, noting that those who died left hundreds of orphans and widows uncatered for, the legal luminary said.
In the past, the CJTF had been accused of abuses, including slaughtering men beside a mass grave, diverting food destined for starving families and beating men and subjecting women and girls to systematic sexual violence in camps. Gunda denied these allegations, querying why people who swore to give their lives for the protection of the citizens of their country would engage in such inhuman practices.
“Many of them have died for the problems they didn’t create. Security is everyone’s business, and so, they gave all that they have, including their lives to fight for their fatherland. “These are some of the unsung heroes of this fight against Boko Haram,” Gunda added. Thanks In assisting the militia group, the government has so far donated more than 60 operational vehicles to aid its operations and service to their country.
Top Stories