Oyegun said he would not join issues with Wambi and his co-travellers because they were struggling to remain afloat and relevant in the party. 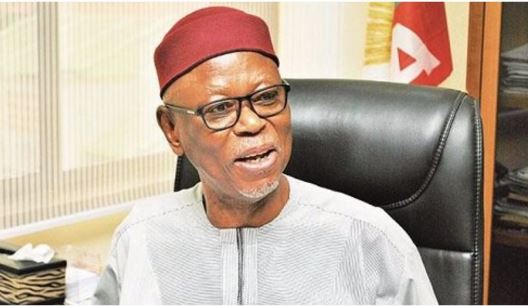 Chief John Odigie-Oyegun
Former National Chairman of the All Progressives Congress (APC), Chief John Odigie-Oyegun, has dismissed attempts by some members of the National Working Committee (NWC) of the ruling party to rubbish his legacies.
He specifically asked such persons to bury their heads in shame.
National Vice Chairman of the APC (North-Central), Ahmad Suleiman Wambi, yesterday, accused Oyegun of unjustly attacking the National Chairman of the party, Comrade Adams Oshiomhole with whom he was engaged in a series of bitter altercations in recent weeks.
According to Wambi, Oyegun’s criticisms of Oshiomhole’s stewardship in the APC was borne out of malice and grudges over his removal from the leadership of the ruling party.
But, Oyegun said he would not join issues with Wambi and his co-travellers because they were struggling to remain afloat and relevant in the party.
Oyegun, in a statement by his Adviser on Public Affairs, Chief Ray Murphy, said that those accusing him of harbouring grievances against the party were merely diverting attention from the confusion they created in the party after the bribery scandal that trailed the last primary elections.
The former National Chairman of the APC said that contrary to the insinuations in some quarters, he left the party in a state in which members of the party were proud of and was therefore not bitter about his exit.
He said, “The party leadership should rather bury their heads in shame for losing five states. Instead of wearing sack clothes to beg APC members to forgive them, they are busy looking for whom to cast aspersions on.
“As a grandfather, he (Odigie-Oyegun) won’t join issues with people that are still confused over the bribe they collected and confusion they created during the party primaries.
“They should know that Chief Oyegun, as an 80-year-old has moved on and as an elder statesman, he wishes the party success in all its doings. And in doing so, he wishes that the people who run the party will learn the politics of decorum, diplomacy and how to speak in public.”
Top Stories

"I Married Regina In 3 Weeks, She Knows I Will Marry Again" - Ned Nwoko Confesses In New Interview (Video)
Popular Stories