They met on Facebook before she decided to visit him not knowing that he had planned to use her for money ritual. 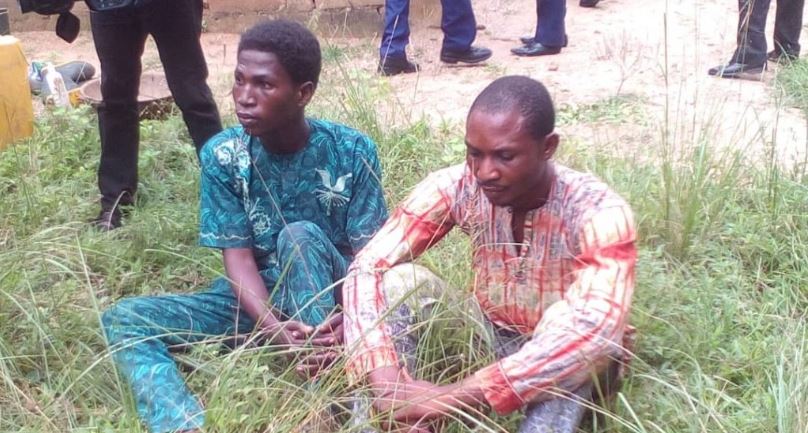 The suspects
The Oyo State police command on Thursday unmasked killers of a 25-year-old housewife, Bosede Oguntade who was lured to Igboora, Ibarapaland area of the state by her assailants via Facebook, Punch has reported.
The butchered remains of the victim were exhumed before journalists and sympathizers in the area.
At the scene of the incident, scores of sympathizers were wailing and raining curses on the spiritualist and his accomplice who lured the unsuspecting victim and grounded her body parts into powder for money rituals.
Bosede, who hailed from Ilorin in Kwara State was lured to Igboora to get solutions to her economic and marital problems by an Ibarapaland-based spiritualist.
She met her untimely death when on arrival, she was strangled to death by a ‘prophet’ one Dotun Ogunlade popularly called ‘Arole Jesu’ in Igboora.
The commissioner of police in the state, Shina Olukolu who led his team to the location where the victim was buried, said the head and arms of the victim were cut-off before he (Ogunlade) buried her.
Explaining how the victim was killed, the police boss said on arrival of the woman in Igboora, the fake prophet told her to rest having travelled far.
The police said she was subsequently offered sleeping tablets.
Olukolu said she was allegedly injected with an overdose sleeping pills. Thereafter, she was strangled to death.
He further said that her head and arm were thereafter taken for rituals while the remains were buried in a shallow grave, at Ogboja area of the town.
Olukolu added that based on credible information and diligent investigation, the police in Igboora were able to smash and arrest the syndicate.
“Further investigation revealed that parts of her body were allegedly grounded into powder for rituals.
“Items recovered from the assailants were two knives used to kill and cut her body parts. A white cloth bag containing substance inside a gourd where the alleged grounded body parts were kept and a bottle of stallion gin were also recovered.”
Olukolu, however, warned people to collaborate with police by giving timely and useful information to enable them to serve the community better.
“The police will continue with our resolute determination to stamp out crimes and criminality in society. Members of the public should be careful in having absolute trust in individuals or groups who are strangers, especially those they met on social media or those who claimed to possess the power of clairvoyance or ability to combat and treat successfully terminal diseases or possess solutions to social and marital challenges.”
Speaking with journalists, the suspect, said he gained church experience from his former boss who happened to be a prophet of Cherubim and Seraphim.
He said, “The woman and I had been chatting on Facebook since January, this year. I later invited her to Igboora. My friend, Mutiu, had already told me about his own challenges in life. He told me he was ready for money rituals. So, I decided to use the woman for money for him.
“When the woman later arrived from Ilorin, I went to pick her. On her arrival at my house, on the 31st of May, this year, I gave her sleeping drugs after she complained about pains in her body. She slept off and I cut off her head and arms. Her head was later burnt to ashes for money rituals,” he confessed.
Top Stories