An arrested Boko Haram commander has opened up, revealing that his forst assgment was to kill a teacher and three friends. 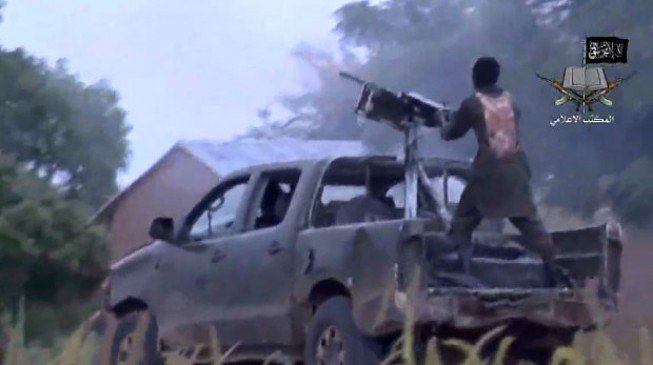 File photo: Boko Haram
According to a report by TheCable reports, Umar Abatcha, a Boko Haram commander who was arrested in Borno state last month, has reportedly opened up on some of the atrocities he committed when he was under the control of the sect.
Better known as “Skely” in Gwange Sabon Layi in Maiduguri, Borno capital, he was said to have escaped to Lagos after leaving the camp of the insurgents but he was arrested when he returned to the state on May 13.
Mohammed Aliyu, police commissioner of Borno, said the suspect confessed to being a member of Boko Haram sect when he was grilled by detectives.
He disclosed that Abacha claimed he returned to Maiduguri, thinking that nobody will recognise him.
He was quoted as saying he was forced to pick arm to fight with the military, adding that his first assignment was killing a teacher and three of his close friends.
Aliyu said the suspect confessed to have been part of many attacks on security locations in which military weapons were carted away.
Another suspect identified as Ali Ibrahim was arrested on January 6, 2019, by the federal special anti-robbery squad (FSARS) at Dikwa low-cost estate in Maiduguri.
Ibrahim said he spent four years with the group and that he carried out attacks in the shores of Lake Chad and Cameroon.
He claimed to have escaped from one of the group’s camps in Cameroon  after denouncing membership of the sect.
“I beg for forgiveness for all the crimes and atrocities I was forced to commit while I was with Boko Haram,” he said.
Top Stories