Following sad reports how his son fell from his four-storey apartment in Lekki, Lagos, the victim's father has reacted. 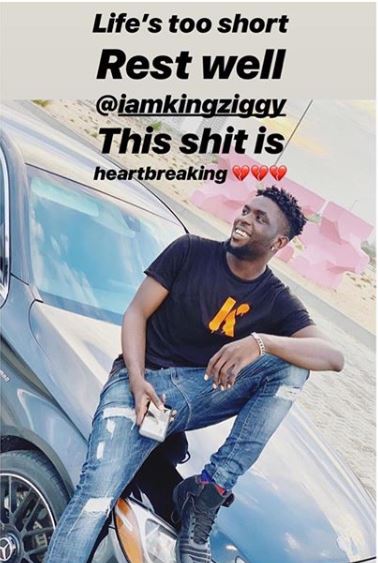 Ziggy
A sexagenarian, Festus Eti, is demanding justice for his son, Zino, popularly known as Ziggy, who died after he fell from his four-storey apartment in Lekki, Lagos.
According to Punch, Festus, who attributed the incident to negligence, demanded that the management of the estate, which is owned by Lekki Gardens, must be held responsible for his son’s death.
It was gathered that the upcoming rapper fell from the top of the building at the Paradise Estate after he mistakenly fell into an open space, which was supposed to house an elevator.
According to reports, several residents had complained about the unprotected open space to the management of the estate, which allegedly did nothing till it claimed the life of the 23-year-old on June 16, 2019.
The 66-year-old father said his son’s death was a bitter pill to swallow as he was a promising young man with dreams and aspirations.
The Delta State indigene said, “Zino lived with his friends and one of them called me as soon as the incident happened. I live in Warri and I travelled to Lagos on Monday.
“According to his friends, when he got home on Sunday around 10pm, he ran up the stairs to the fourth floor, where his apartment is. He was tired and wanted to catch his breath. He wanted to lean on something and he unknowingly leaned on the wall near the open space, because there was no power supply. He fell down and unfortunately, he did not survive the fall.
“Zino was my first son and a final year student of Public Administration at the Lead City University. Though his friends have reported to the police, I also intend to report to the Office of the Public Defender, because it is a clear case of negligence; the owner of the property left the elevator space open.”
Festus said though the management of the estate had visited him to commiserate with him, he intends to sue the firm for negligence.
“Zino’s friends said they had written to the management on several occasions about the open space to no avail, only for it to be blocked after my son had died. The management of the estate paid me a condolence visit, but I still intend to sue them for their negligence,” he added.
A media consultant to Lekki Gardens, Bolaji Abimbola, who described the incident as unfortunate, said the company’s intention was to make life easier for the residents.
He stated, “The estate is a five-storey building and there is a lift shaft, but it has not been installed. Before now, it was sealed with blocks. The company, with the intention to make life easier for the residents, contracted the installation of the lift to a contractor.
“To do the job, the contractor had to remove the blocks. In the process, the lift space was not covered. When the residents contacted the company about the development, it wrote the contractor, who put a safety tape round it; but unfortunately, it didn’t suffice.
“The firm has been engaging with the family and has condoled with them. Only God understands how the incident happened, because all the residents knew about the ongoing installation of the elevator.”
Top Stories