A young boy has died after he and his friends sneaked out of school to swim at a Lagos hotel swimmig pool. 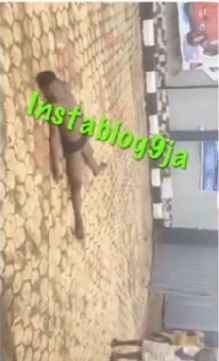 A video has emerged online, showing the moments after a young boy drowned inside a hotel pool in Lagos.
In the video, a crowd is seen standing round the dead boy's body as they speak in shocked tones. The sad incident reportedly happened at the Maysun hotel in Egbeda, Lagos.
Local reports show that the boy and his friends had sneaked out of school to swim at the hotel when the incident happened.
The sad incidence has left the school as well as the boy's family and friends distraught.
Watch the below from the scene of the incidence below: