Shocking! IBEDC Staff Nearly Dies Of Electrocution After A Mistake By His Colleagues In Ogun (Video)


A staff of the IBEDC has almost died of electrocution after his colleagues reportedly made a mistake in Ibadan. 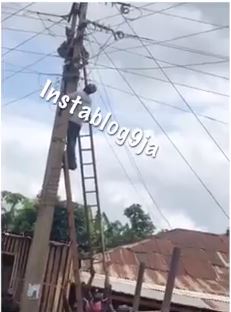 A video has emerged online showing how a staff of IBEDC almost died after he was electrocuted on duty.
In the video, the IBEDC staff was seen trying to fix a faulty connection on a pole wire as people gathered round him on the ground to watch. In the next clip, the man is then seen being rushed away by his colleagues to get treatment.
According to reports, the IBEDC staff was on the pole when his colleagues made a mistake and he got electrocuted. He was then rushed to hospital.
His current condition is not known.
Watch the video from the scene of the incident below: