The Blues are currently under a two-window transfer ban by FIFA meaning that they can't sign players until the summer of 2020. 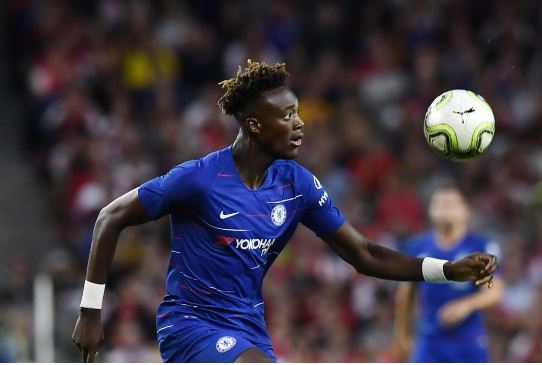 Tammy Abraham
Nigeria-eligible striker, Tammy Abraham has revealed his decision to remain in Chelsea next season.
Abraham confirmed to The Sun UK that he will stay in Chelsea next season and fight for his position.
This is amid speculation linking him with a departure from Stamford Bridge.
Former Chelsea midfielder, Frank Lampard, is a front-line contender for the managerial position at Stamford Bridge following the departure of Maurizio Sarri.
The Blues are currently under a two-window transfer ban by FIFA meaning that they can’t sign players until the summer of 2020.
Abraham, England U21 striker, told The Sun, ”These two windows are a great opportunity for the young players at Chelsea to show what they can do. That’s how all the young players at the club are looking at it.
”Whoever goes into Chelsea as manager I am going to show him what I am truly made of.
“Chelsea have always had a great academy but they have lacked playing them and taking them to the next level.
”Fingers crossed, if it all goes well it changes the mind-set at the club. Of course, the transfer ban is probably not what the club wanted but for us it is exciting.
”This year is the most important year for us youngsters at Chelsea — it is now or never.”
Top Stories