A pastor who had the nerve to fake his own kidnap in order to obtain ransom from church members has landed in prison. 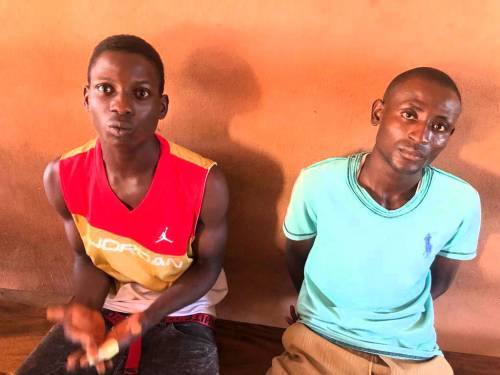 The pastor and his accomplice
According to Punch Metro, an Ado Ekiti Chief Magistrates’ Court on Monday remanded a 30-year-old Methodist Church Priest, Rev. Peter Adegoke Adewuyi, in prison custody for allegedly faking his own kidnap to obtain a ransom.
The court also remanded Adewuyi’s accomplice, 25-year-old Oluwadare Ajewole, in the alleged crime pending their next appearance in court.
The duo, who were arrested by the Police on June 11, will be tried on aiding, arranging and abetting kidnapping.
Police Prosecutor, Inspector Monica Ikebuilo, alleged that “the offences committed by the priest and his accomplice are contrary to, and punishable under Sections 5 and 7 of Ekiti State Kidnap and Terrorism (Prohibition) Law 2015”.
The prosecutor explained that the act was committed within the Ado Ekiti Magisterial District on June 11.
Adewuyi had claimed that he was kidnapped between Ijebu Jesa in Osun State and Aramoko in Ekiti State while on a journey.
The priest allegedly hid himself in a hotel in Ado Ekiti on the pretence that he had been ‘kidnapped’, claiming that his ‘captors’ were demanding N3 million ransom from his church members and other members of the public.
At the court sitting on Monday,  Magistrate Omolola Akosile ordered that the accused persons be remanded in prison custody pending the issuance of legal advice from the Director of Public Prosecutions.
She subsequently adjourned the case till July 24, 2019.
Top Stories