A very dangerous land-grabber has been nabbed with as many as four guns as well as 38 cartridges and charms in Lagos. 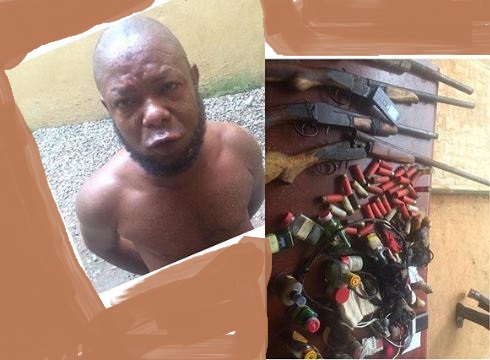 The man was nabbed
The Lagos State Police Command has arrested a land grabber, Ojo Adesola, with four locally made rifles and 38 rounds of live cartridges at Alagbado area of Lagos, NAN reports.
The Lagos State Police Command’s Spokesperson, DSP Bala Elkana, said in a statement that the suspect was arrested on June 21 at about 7.00 a.m. while acting on “credible intelligence” information.
” The surveillance patrol team from Alagbado Police Station arrested one Ojo Adesola, 45. The suspect was flanked down by the surveillance team while conveying arms in a white bus along Amikanle area, Alagbado. Four locally made rifles and 38 rounds of live cartridges were recovered from the bus.
“The suspect who hails from Ogun State belongs to a notorious gang of land grabbers and hired killers, terrorising Ogun and Lagos states. They act as war lords, waiting to be hired by anyone who can pay for their services to take over lands by force. They engaged in series of killings and maiming of land owners.
“According to the suspect, they were hired by someone to dislodge land owners at Epe and that he was on his way to pick the other members of the gang for the operation before he was arrested,” the police spokesman said.
He said that the police were on the trail of five other members of his gang who are at large.
In another development, the police is currently investigating the case of a 56-year-old man who was found dead with his mistress in his sitting room at his Ejigbo residence.
DSP Elkana said one Akorede Balogun ‘f’ of Area 2, Igbehindun Estate, New Heaven, Iba, reported at Iba Police Station that her husband, one Rasaki Balogun of No, 16, Taiwo Oke Victory Estate, Ejigbo ,was found dead with his mistress in his sitting room.
“A team of detectives led by the Divisional Police Officer, Ejigbo, visited the scene. Corpse of the man and his mistress were found in the pool of their blood with the woman laying on a knife.
“The man is said to be living alone in the house, while his family lives in a different place. Identity of the mistress is yet to be established as he was said to have picked her about two days to the incident from unknown location.
“The crime scene was sealed off for forensic analysis, while the corpses were evacuated to hospital for autopsy. Homicide detectives from the State Criminal Investigation Department, Yaba, have taken over the case on the instruction of the Commissioner of Police, Lagos State, CP Zubairu Muazu mni.
“Investigation is ongoing to unravel the circumstances surrounding their death,” he said.
Top Stories