Wole Soyinka's son has broken silence on the recent saga involving his father and a young man on a plane. 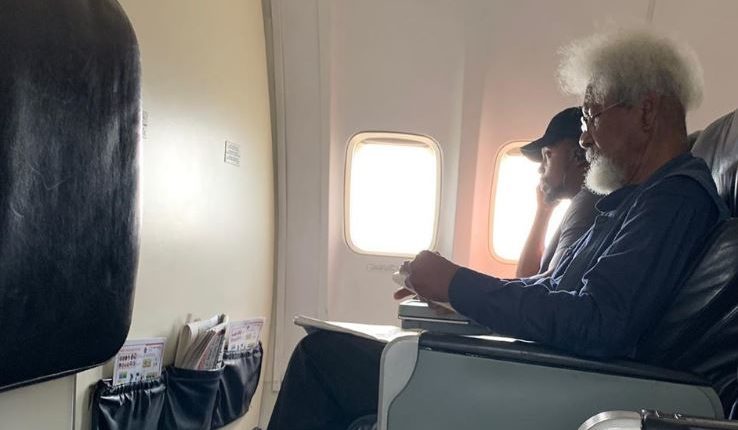 Wole Soyinka and the young man
Oluokun Soyinka, son of Nobel Laureate, Prof. Wole Soyinka, says the unidentified young man who refused to give up his seat for his father was within his rights to do so.
Oluokun said this in an open letter addressed to business mogul, Tonye Cole, who first reported the matter on social media.
Soyinka’s son, while thanking Cole for his concern, however, berated the youths on social media who used the opportunity to insult his octogenarian father.
He wrote, “The young man whose seat it was may have had a specific reason to insist on having his seat. He was within his rights, and WS (Wole Soyinka) would be the last person to make an issue of it. My irritation, however, is reserved for social media warriors.”
“Some vehemently defended the right of the young man to claim his seat. They hailed him for bravely standing up to oppression and divined how a young WS himself might have reacted in a similar situation. (He is an activist but a gentleman, so it is most likely he would have graciously given way to an elder who mistakenly sat in his seat).
“Some criticised WS for attempting to callously deprive a youth of the fruits of his hard-earned money. One wag even suggested he might as well have insisted on having the pilot’s seat.”
Oluokun said the young man missed an opportunity of showing an act of kindness to an old man.
Soyinka’s son said his father was disrespected and ought to have been treated better.
He added, “I believe the learning point of this controversy lies in understanding the difference between right and entitlement. The seat owner had a right – that is enforceable. But the elder though he or she is entitled to some deference and respect, can only hope for it. In this case, it was not given and WS, unhesitatingly moved seat.”
Oluokun added that it was illogical to in one breadth judge Soyinka for occupying another person’s seat and at the same time insist that the young man should not be judged for having tattoos.
He added, “To the online outraged, I would point out that those who like to see an elder given his due deference are entirely within their rights to judge the young man. And if they decide to add some profiling (the t-shirt, tattoo, face cap), please just ‘chop it’!
“He passed up a small opportunity to bestow an act of kindness, and commentators happily pointed out his emblems of youthful disregard for convention. After all, he had just disregarded a convention that many hold dear.”
Soyinka’s son said this was not the first time his father would plead with someone to allow him to occupy the window seat
He said his father does so most times to avoid people who would usually stop at the aisle to shake hands with him on the airplane.
Oluokun argued that his father was a national hero who had made many sacrifices for Nigeria.
He recalled how his father fought several military dictators and even had to go on exile.
Soyinka’s son said when his father returned to the country in the last 90s, he was given a free first class ticket by KLM in recognition of his heroism.
“I have not commented on the fact that beyond being an elderly man, WS has served his country in a way that many would do well to emulate. I will leave that for others to go into. Our garrulous online youths, however, should not take freedom of expression for granted. In his day, the dictator Abacha tightly controlled the then novelty called the Internet.
“People spent decades in jail, being tortured for merely hinting at criticism of the military ruler. Our freedom to hold our leaders accountable is a precious right bought by the heroism of many; some died, some are still living. So, as you fight your battles of today, please do so with a sense of history,” Oluokun said.
He said extending courtesies based upon age such as offering your seat in a crowded bus or lifting a heavy bag is not just a matter of convention or kindness but common sense.
He asked youths to remember that they would one day grow old and would one day rely on considerate fellow passengers or observant bystanders.
Top Stories