Three yahoo boys have gotten themselves in serious trouble after being found out to have carried out romance scam. 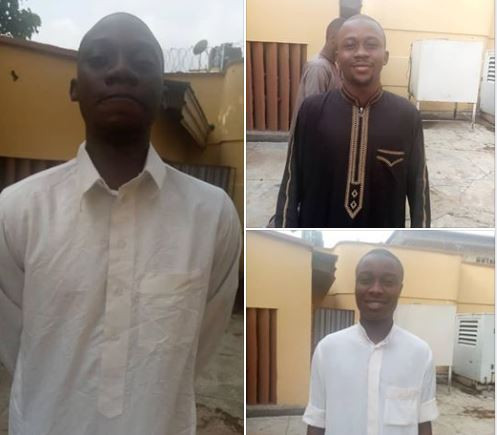 The Economic and Financial Crimes Commission, EFCC, Ilorin Zonal Office on Wednesday, June 26, 2019 secured the conviction of three persons charged on offences bordering on romance scam.
The convicts are, Akeem Mustapha (alias Patricia Cuppa), Abolarin Sunday (alias Cindy Holland), and Murtala Abdulrasheed (alias Cindy Holland).
They were convicted and sentenced to one year imprisonment by a Kwara State High Court sitting in Ilorin by Justice Mustapha Abdulgafar.
They pleaded “guilty” to the one-count amended charge levelled against them by the anti-graft agency.
The one count amended charge reads: “That you, Murtala Abdulrasheed (alias Cindy Holland), sometime in February 2019, at Ilorin, within the judicial division of the Kwara State High Court, did attempt to cheat by personation, when you pretended to be one Daniel Aaron, a Vice Admiral in the United States Navy who is a single dad; a representation you knew to be false and thereby committed an offence contrary to Section 95 of the Penal Code and punishable under section 324 of the same penal code.”
Counsel for the EFCC, Andrew Akoja, informed the court of the amended charge, which was part of a plea bargain that the defendants entered into with the Commission.
Counsel for the defendants, S.O. Babakebe, confirmed the plea bargain agreement.
While reviewing the facts of the case, an EFCC operative, Ushie Okom narrated how the Commission got wind of their fraudulent activities.
He said: “Sometimes in February 2019, the Economic and Financial Crimes Commission received intelligence reports about the activities of some internet fraudsters around Irewolede area of Ilorin.
“We moved straight to the scene and conducted a search on their residence, they were arrested, items like phones, laptops were recovered from them, when their email addresses were opened, we discovered that they have made various false representations, they presented themselves as women and sent various nude photographs to their victims.”
Justice Abdulgafar after hearing the parties in the case said: “In view of the plea bargain agreements dated 25th of June 2019, the accused persons are hereby convicted in line with the terms and conditions agreed by the parties.
“The defendants are hereby sentenced to a one year imprisonment effective from the 12th of February 2019 when they were arrested; all the items recovered from them are hereby forfeited to the Federal Government.”
Top Stories