At least six persons were injured after armed police officers and youths stormed a shopping mall owned by Okorocha's daughter. 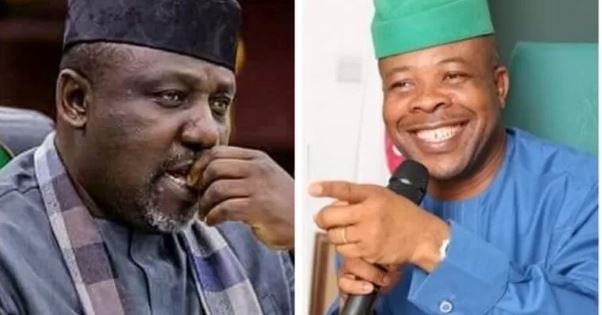 Rochas and Ihedioha
The drama and power tussle continues in Imo State between the present Governor of Imo state, Emeka Ihedioha and former Governor Rochas Okorocha has taken a new twist on Thursday night in Owerri after armed youths and police attached to the Imo State Committee on Recovery of Government property invaded a shopping mall (House of Freeda) owned by the daughter of the immediate past governor of the State, in search of government property.
It was later gathered that property and merchandise including clothes, chairs and fridges were carted away and no fewer than six workers in the complex were severely wounded during the invasion that was supervised by the Chairman of the Committee, Hon Jasper Ndubuaku.
According to eyewitnesses, the fierce-looking youths aided by armed Policemen forced their way into the complex that houses several businesses owned by individuals not related to the former governor and started carting away electronic appliances and other expensive items that were displayed for sale.
Watch video below: