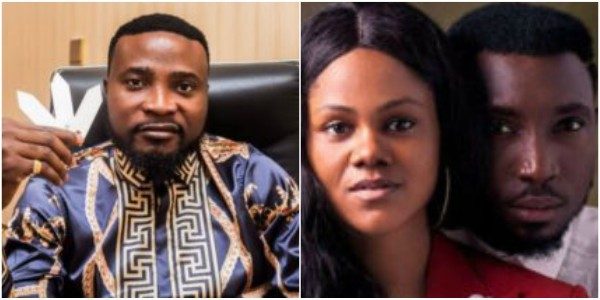 Wale Jana and Busola, Timi
Nigerian businessman, Wale Jana has gotten more than he can chew after he defended COZA pastor, Biodun Fatoyinbo accused of raping Busola Dakolo, wife of musician, Timi Dakolo some years back.
Jana had taken to his page to accuse the Dakolos of blackmail. However, Nigerians and celebrities alike didn't find his twist funny as they attacked him.
See reactions below:
Simi: This is so shameful.
Juliet Ibrahim: Wow! I had alot of respect for you but after reading this I’m appalled! Do you know what it takes for a grown woman to come out and speak about being raped even accept to be labeled a victim; not to talk of announcing that she lost her virginity to RAPE? You certainly have the mind of a rapist for even typing this selfish nonsense on your page today wale! Do you know how many of us that has been molested and violated yet we can’t find the courage to speak up? Ask your wife, sisters and mother how it feels like and works! I’m sure one of them has secrets too! You are the struggling one here trying to sell your brand and products. Timi is not struggling. This is so low of you!
Kemi Adetiba: A word of advice. One can be a blessing to you and a monster to others. This isn't a nollywood film where the wicked step mother or father is wicked to everyone including herself. Adolf Hitler was one of the most charismatic people that ever lived. How else would he have been able to lead an entire country to invade, and commit the worst of atrocities against the jews. There is such a thing as a wolf in sheep's clothing. Be mindful... is blind and there is stupid. Because you have not witnesses personally doesn't mean it can or has never happened. Don't write someone a blank check because he stands behind a pulpit. This would never be the first time we've heard stories of the "annoited" falling from "Grace". Neither will this be the last. She has come out to say her truth. Whether you believe her or not she deserves to unburden. 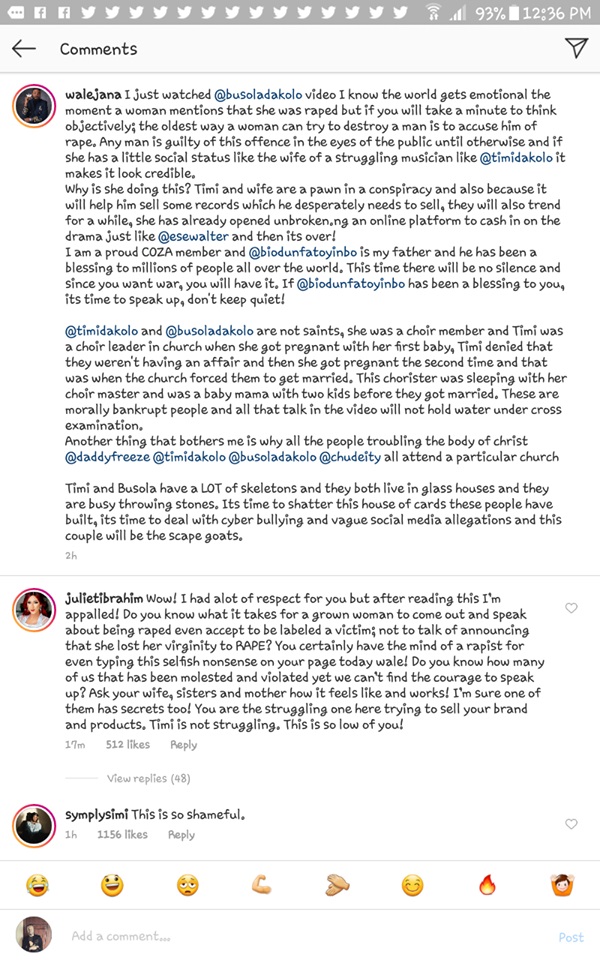 Lala Akinjobi: Just so you know, this comment makes you an accomplice and you are part of the problem!!! Dig out Timi and Busola’s entire past!!! It changes nothing. It is people like you that make people stay away from church because it is obvious you worship your pastor-(a man)and you will do nothing to keep his image clean no matter the consequence.
WOW!!! You really think this is about selling records??? Really????? Timi and Busola do not claim to be saints, they embrace their journey and their past. Did you listen to how specific she was??? Do you really think a woman would risk all this bashing for cheap fame???? Have you been raped or sexually abused before??? Do you know the damage it causes??? You really really really really think a woman will risk all this bashing because she and her husband want to sell records. I pray nobody you love experiences rape or sexual abuse of any form.

I just watched @busoladakolo video I know the world gets emotional the moment a woman mentions that she was raped but if you will take a minute to think objectively; the oldest way a woman can try to destroy a man is to accuse him of rape. Any man is guilty of this offence in the eyes of the public until otherwise and if she has a little social status like the wife of a struggling musician like @timidakolo it makes it look credible. Why is she doing this? Timi and wife are a pawn in a conspiracy and also because it will help him sell some records which he desperately needs to sell, they will also trend for a while, she has already opened unbroken.ng an online platform to cash in on the drama just like @esewalter and then its over! I am a proud COZA member and @biodunfatoyinbo is my father and he has been a blessing to millions of people all over the world. This time there will be no silence and since you want war, you will have it. If @biodunfatoyinbo has been a blessing to you, its time to speak up, don't keep quiet! @timidakolo and @busoladakolo are not saints, she was a choir member and Timi was a choir leader in church when she got pregnant with her first baby, Timi denied that they weren't having an affair and then she got pregnant the second time and that was when the church forced them to get married. This chorister was sleeping with her choir master and was a baby mama with two kids before they got married. These are morally bankrupt people and all that talk in the video will not hold water under cross examination. Another thing that bothers me is why all the people troubling the body of christ @daddyfreeze @timidakolo @busoladakolo @chudeity all attend a particular church Timi and Busola have a LOT of skeletons and they both live in glass houses and they are busy throwing stones. Its time to shatter this house of cards these people have built, its time to deal with cyber bullying and vague social media allegations and this couple will be the scape goats.

Nigerian Senator Opens Up, Reveals How SARS Operatives Killed One Of His Constituents
Popular Stories