The defence ministry says an air force officer suspected of "transporting narcotic substances" has been detained in Spain. 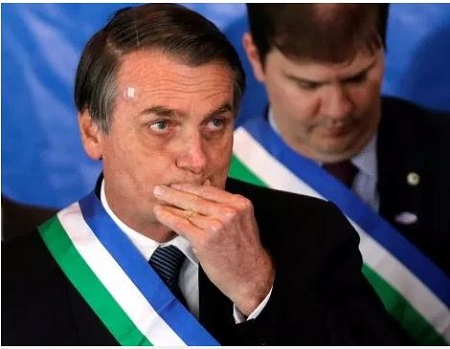 President Jair Bolsonaro was heading to the G20 summit in Japan when the arrest was made (Picture: AFP/Getty)

A Brazilian air force officer travelling with President Jair Bolsonaro's G20 team has been arrested after being caught with 39 kilograms of cocaine.

The officer was detained in Seville, Spain, when the back-up plane travelling to Osaka made a stop-over, a statement released by the Brazilian defence ministry said.

It said: "The defence ministry informs that, on Tuesday 25 June, an air force officer suspected of transporting narcotic substances was detained in Seville airport in Spain.

"The military man is detained at the disposal of the Spanish authorities. The aeronautics command established a military police inquiry (IPM) to determine all the circumstances of the case.

"Measures to prevent such illicit acts are adopted on a regular basis. In view of this, these measures will be strengthened."

Mr Bolsonaro was travelling on a separate plane and reacted to the arrest on Tuesday on Twitter, saying he had asked the defence ministry to cooperate with Spanish authorities.