This means that the likes of Victor Osimhen, Henry Onyekuru and John Ogu may have a taste of the game in Egypt. 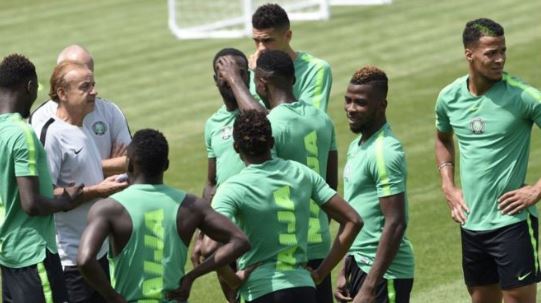 File Photo
Head coach of the Super Eagles, Gernot Rohr has revealed what his lineup may look like against Madagascar in their last group game tomorrow.
The German said he will certainly make changes in the match.
This means that the likes of Victor Osimhen, Henry Onyekuru and John Ogu may have a taste of the game in Egypt.
Nigeria has already booked a place in the round of 16 with a game to spare.
”I can say you can expect some changes because I want to put everybody under pressure to be concerned by the matches,” Rohr said at Saturday press conference.
”There is competition for each position now, even in the goalkeeper department, even in the central defense, even for the striker positions.
”We will see in the last training this evening which changes we can make. In the last match we had five changes and it’s possible that there will be changes in the match for tomorrow.
On Madagascar, he said, ”I don’t believe that they are tired because they won the game and they are a team which is very fit.
”They have good staff, I know them. French people who are working very well, fitness coach, Nicolas Dupuis is a very good coach in France so they are really very fit.
”They have the experience to recover very quickly, and they started like us on the same day and tomorrow’s match is very open against this good team of Madagascar.”
Top Stories