Nigerian Man And His Indian Girlfriend Nabbed With Cocaine (Photo)


Security operatives in India have apprehended a Nigerian man and his girlfriend with cocaine. 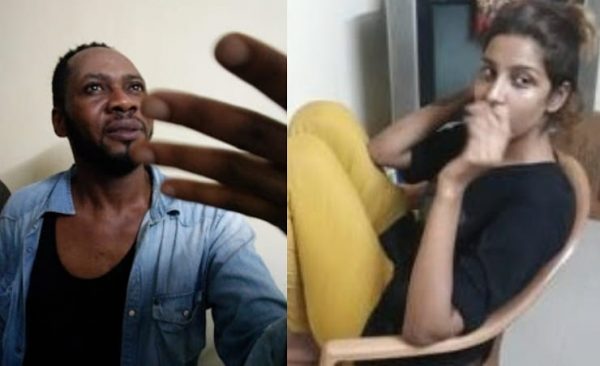 The suspects
A Nigerian man has been arrested in Mumbai, India alongside his Indian girlfriend for possession of 20 grams of cocaine.
Following up on a tip-off that Andy Matin Edoji, 45, will make a deal in Mahavira Nagar in Kandivali, PSI Suryakant Pawar and his staff laid a snare close Mahavir Nagar Kandivali west on Sunday night and attempted to stop a suspicious Volkswagen vehicle.
While attempting to do as such the accused hurried off with the vehicle avoiding the cops but collided further away. The police authorities at that point encompassed the vehicle and after that nabbed Edoji. He was in the vehicle alongside girlfriend Aaliya Sheik, 29, when the cops got him.
While experiencing an inquiry of the vehicle. the police authorities recovered 20 gram of cocaine worth around Rs 1.5 lakh. “Edoji has been living in Kharghar throughout the previous year while Aaliya lives in Jogeshwari.
The two became acquainted via social media. She has had several cases of drug-peddling against her in Delhi and other north Indian cities,” informed a police official.
During interrogation, it was revealed that Edoji came to India on a business visa and was residing in a rented flat in Khargar area since January 2019.
Aaliya, a resident of Jogeshwari, would visit high-profile pubs and clubs to seek out customers. Edoji would then supply the drugs.
An official said that the houses of both the accused have been searched but no drugs were found. Police have also seized the man’s passport and the Volkswagen car he was driving.
“We are investigating other aspects of the case including where he acquired the drugs from,” said the official.
“Both the accused were booked under various sections of the Narcotics Act and were produced before the court today. They were remanded in police custody,” the police official added.
Top Stories