A serving Nigerian senator has been caught on camera assaulting a woman at a s*x toy shop in Abuja. 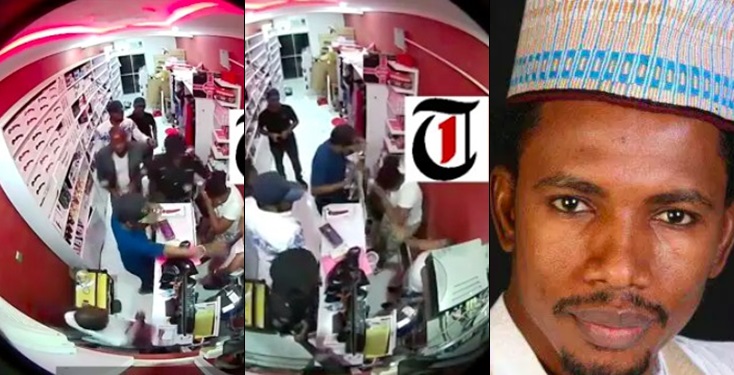 Elisha Abbo
Senator Elisha Abbo, a serving lawmaker, has attracted criticisms from Nigerians after being caught on video slapping a nursing mother repeatedly at a sex toy shop in the Wuse 2 area of Abuja.
Abbo, who defeated  Senator Binta Garba in the Adamawa North senatorial district election, was seen assaulting the woman in a video posted by Premium Times.
The assault, which reportedly occurred on May 11, 2019, was done in the presence of an armed policeman who rather than assist the victim, arrested her.
Abbo, who is the youngest senator in the country,  entered the shop around 6pm. with three young women to purchase adult toys.
But shortly after they began shopping for the toys, one of the three girls started throwing up. She vomited multiple times, prompting the shop owner to remark that the woman should have vomited outside and not inside her shop.
Abbo, who was said to be agitated by the sudden illness of the girl, was said to have accused the shop owner of poisoning the store’s air conditioner.
The shop owner’s argument that if the air conditioner had been contaminated others in the shop would have also taken ill was said to have angered Abbo, and the two began exchanging words over the matter.
The senator was said to have called a policeman who he then ordered to arrest the shop owner.
The shop owner quickly called her father to inform him that Abbo had called police over the matter and that she was about to be taken away.
The shop owner’s friend who had been standing nearby tried to intervene by pleading with the second man to take things easy but was slapped repeatedly by the lawmaker.
Watch the video below:
Meanwhile, the video has sparked outrage on social media.
On Twitter, the lawmaker is trending under #SenatorElishaAbbo.
Mr Marcus tweeted, “You can see the motor park behaviour of a so-called Senator Elisha Abbo. You are a beast and you need to be behind bars.”
Another Twitter user, Confidence Jonah, expressed shock that a policeman was complicit in the assault.
For Jack Obinyan, Abbo must be suspended indefinitely from the 9th National Assembly and prosecuted with immediate effect.
Muhd El-Bonga Ibrahim tweeted, “These are the kind of people we elect as lawmakers shamelessly slapping a sales employee multiple times. This is an embarrassment not only to Senator Elisha Abbo but the Senate as an institution and he is currently the youngest. The committee on ethics needs to act.”
Reacting to the incident, Abbo said the incident portrayed in the video showing him beating up a lady in a sex toy shop occurred in March 2019.
Abbo said this in an interview with our correspondent on Tuesday while responding to a question from The PUNCH.
He said he was putting a team together and he would give a robust response soon.
Abbo said, “Hello Eniola, I saw your message and I am aware of the report. I am putting my team together. I am aware that the thing happened around March this year but I will get in touch with you when we finish discussion.  I am in a meeting now.”
Top Stories