Vice President Yemi Osinbajo and the Senior Special Assistant to the President on Media and Publicity, Garba Shehu have shown that they are not on the same page on the Ruga programme. 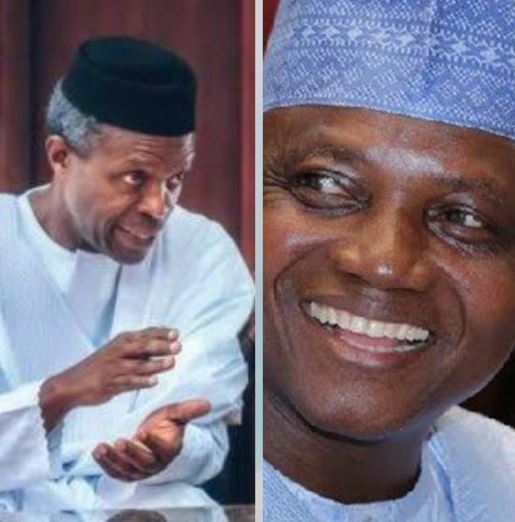 Osinbajo and Shehu
The Senior Special Assistant to the President on Media and Publicity, Garba Shehu, has contradicted Vice-President Yemi Osinbajo’s claim on Ruga programme.
According to Punch, Osinbajo had while refuting a statement by the Miyetti Allah Cattle Breeders Association of Nigeria, said the Ruga programme was different from the National Livestock Transformation Plan
In a statement, the Vice-President had said, “Contrary to claims reported in sections of the media, Ruga settlements are not being supervised by the Office of the Vice President. Ruga is different from the National Livestock Transformation Plan approved by state governors under the auspices of the National Economic Council.
“On the National Livestock Transformation Plan, 13 states are already in the process of implementation of a plan to transform the livestock production system in Nigeria along market-oriented value chain while ensuring an atmosphere of peace and justice.
“The states are Adamawa, Benue, Kaduna, Plateau, Nasarawa, Taraba, Zamfara, Katsina, Kano, Kogi, Kwara, Ondo, and Edo. These states are at different stages in the process, but have indicated readiness to implement the plan. Truth is: this Federal Government will not impose on any state government regarding its land.
Speaking on The News at 10 on Channels Television on Monday, Shehu, however, said Ruga and the National Livestock Transformation Plan were only different in name.
When asked if the two were different, he said, “It is just a matter of semantics. These herders who roam the entire country and overrun farmlands cause disaffection and fight and the government wants to stop this.
“So, we want to settle them in one place, provide the entire infrastructure they need. As a matter of fact, markets will come to this Ruga settlement or ranches. There will be establishment of meat processors, the utilisation of by-products including sanitary wares that will be developed from hoofs and horns. There will be a lot of business and money from this. It is not confined to Fulani. It is a business open to all Nigerians.”
Top Stories