In the wake of suffering his first career defeat, Joshua exercised an immediate rematch clause. 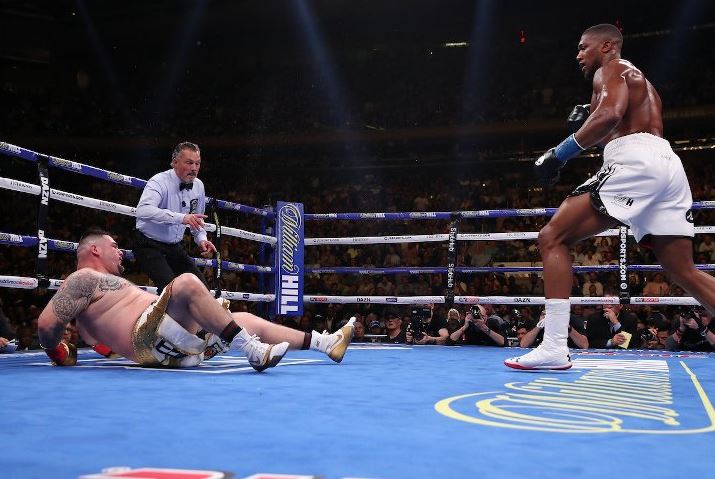 Andy Ruiz and Anthony Joshua
Former world champion turned trainer, Ricky Hatton, is very confident that Anthony Joshua is capable of getting his revenge when he takes on Andy Ruiz at the end of the year.
In the wake of suffering his first career defeat, Joshua exercised an immediate rematch clause.
Last month at Madison Square Garden in New York City, Ruiz stopped Joshua in seven rounds to capture the IBF, IBO, WBA, WBO heavyweight titles. During the bout, Joshua was dropped four times before the contest was waved off.
Hatton believes Joshua made a big mistake when he rushed in on Ruiz, who had just been dropped and rocked.
During that moment in the third round, Ruiz landed a counter that badly hurt Joshua and he himself was dropped twice in the same round.
“There’s loads of rumours knocking about… When a defeat comes up for one of our top fighters we always try and find out the reasons to try and get to the bottom of it. He didn’t look quite right before the fight for me. He was boxing okay, he knocked him down, but then I think he went in for the kill. Mexicans are just as dangerous when they’re hurt," Hatton said to Talk Sport.
“I think maybe, knowing what a tough guy Ruiz was, maybe he should’ve softened him up a little bit more before he went in for the kill.”
Because Hatton views Joshua as a much better fighter, he has no issue with the British superstar taking the rematch right away.
“That’s up for Robert McCracken and Eddie Hearn, they know the machine they’re dealing with in Anthony. Sometimes people come back from defeats with a vengeance and some people they never come back the same," Hatton said.
“If you have to ask me as an outsider, I‘d say he beats Ruiz nine times out of ten, for me. Even though he’s a very, very dangerous fighter and he’s got very, very fast hands and he’s already planted that danger in Anthony’s mind.
“I think it’s a decision for the people that know Anthony best. If Nathan Gorman were to get beat by somebody and people were saying, ‘Oh, he’s gotta do this,’ I would tell them to mind their own business because they don’t know the man. But I would like to still see him back in there in future because it was still a shock defeat. I think he’s a better fighter than Ruiz, so I would get straight back in.”
Top Stories