unknown casaulty with over 30 vehicles burnt following the early morning fire that engulfed the NNPC pipeline at Ijegun, a Lagos suburb. 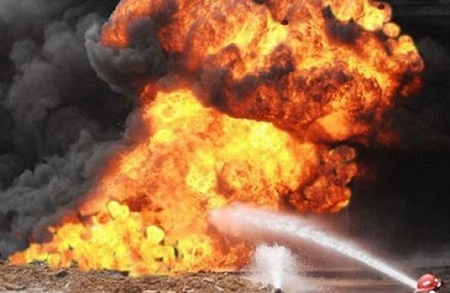 Many people are feared killed in a fire incident that has engulfed the Last Bus Stop area of Ijegun, in the Igando-Ikotun Local Council Development Area of Lagos State, on Thursday.

Our correspondent gathered that some suspected bunkerers were on their way out of the area after scooping fuel from a vandalised pipeline when one of their tankers fell and spilled fuel.

The fuel spillage was said to have caused the fire incident as residents scamper for safety abandoning their homes.

As of the time of this report, the figure of the casualties and burnt properties could not be ascertained, as the flames had prevented people from gaining access to the area.

An eyewitness, Babajide Lawal, said the noise of the explosion woke residents up in the neighbourhood, adding that casualties have been recorded.

Lawal said, “There is fire incident at Ijegun Last Bus Stop, in fact, no one can move near the place because the whole area is burning. What woke us up was the sound of the  explosion and when we came out to observe what happened, we saw the fire burning everywhere.”
Top Stories