Heartbreaking reports have shown that some Nigerian migrants and other persons have been bombed at a Libyan camp. 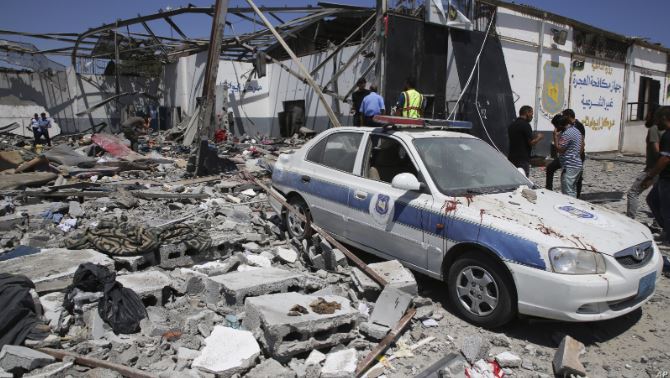 Scene of the incident
Nigerians were among those killed at a migrants camp that was bombed in Tripoli, capital of Libya, on Tuesday night.
At least 44 people were killed while as many as 130 were said to have sustained injuries in the incident which the United Nations said might amount to war crime.
Survivors said the attack occurred about 11:30pm and that they had regularly heard drones hovering over the detention compound in recent weeks.
“At the beginning we heard faraway clashes, then we heard this strong bomb,” VOA quoted Saddam, an 18-year-old from Sudan, as saying.
The survivor is said to have been detained for a year after being caught attempting to cross the Mediterranean to Europe.
“We were banging on the doors and the security people came and let us out and we saw the building on fire,” he said.
Tripoli officials attributed the attack to the forces loyal to Khalifa Haftar, a strongman who leads the military in eastern Libya.
Haftar’s forces have been locked in battle for three months with the forces loyal to the internationally backed government in Tripoli. They are fighting for control of the city and the future of the Libyan government.
President Muhammadu Buhari has condemned the airstrike, describing it as “inhuman, wicked and callous”.
The Nigerian leader, who called for an international investigation, said those behind it must be made to face justice.
Buhari said the unfortunate attack is a wake-up call to the warring factions in Libya and the international community to quickly restore peace and stability in the country.
He prayed that God would comfort grieving families and grant speedy healing to the injured.
The federal government has repatriated thousands of Nigerians who were detained in Libya.
Top Stories